Female fertility declines rapidly after the age of 37, with women over age 42 only having a five percent chance of conceiving without fertility treatment.

Securin is important for both egg divisions but in old eggs, it appears that there is insufficient securin remaining to ensure meiosis II takes place normally. Photo courtesy Monash Biomedicine Discovery Institute

May 18 (UPI) -- Australian researchers may have found the key to unlocking the mystery of infertility, miscarriage and birth defects in older women over the age of 37.

Female fertility declines rapidly after the age of 37, with women 42 and older having just a five percent chance of having a baby without fertility treatment.

A study by the Monash Biomedicine Discovery Institute, or BDI, and the University College London have uncovered a fault in how the egg controls the levels of protein called securin leading to increased risk of miscarriage and chromosomal abnormalities like Down's syndrome in the fetus.

Most chromosomal abnormalities in eggs cause embryos to fail to implant in the womb or miscarry soon after implantation.

In the final stages of egg development prior to ovulation, two types of cell division take place, melosis I and melosis II. Securin is vital for both divisions, but in older eggs there is insufficient securin remaining to allow melosis II to happen normally.

Researchers found that in older women the chromosomes in their eggs start to fall apart because there is not enough securin to control the process.

Regulating processes to control securin levels in the two division of the egg or controlling the protein that securin regulates known as separase are ways to improve fertility in older women, especially since more women are waiting to have their first baby.

"Now that we have an idea of at least one of the causes of the increased incidence of chromosomal abnormalities and miscarriages in older women, we can attempt to find ways to prevent this happening," Professor John Carroll of Monash BDI, said in a press release.

The study was published in Nature Communications.

Health News // 49 minutes ago
Psychiatric disorders linked with higher risk for heart disease, diabetes death
Jan. 27 (UPI) -- People with mental health disorders are up to twice as likely to die earlier from chronic conditions such as heart disease and diabetes than those without them, a study published Thursday by PLOS Medicine found. 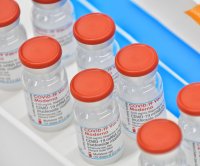 Health News // 3 hours ago
Moderna COVID-19 vaccine aimed at Omicron variant starts trials
Moderna Inc. announced it has launched a trial that will study the power of a redesigned booster shot for COVID-19 -- one that hones in on the highly contagious Omicron variant.

Health News // 3 hours ago
Masks prevent COVID-19 outbreaks at child-care facilities, study says
Jan. 27 (UPI) -- Child-care facilities in the United States that required those enrolled to wear face coverings early in the COVID-19 pandemic saw 13% fewer closures within the following year than programs without these rules.

Health News // 13 hours ago
Injecting fat cells may relieve heel pain from plantar fasciitis
A small pilot study suggests that an injection of a patient's own fat cells can help ease the often-excruciating heel pain brought on by a condition known as plantar fasciitis.

Health News // 22 hours ago
Menthol cigarette use highest among marginalized groups, report finds
WASHINGTON, Jan. 26 (UPI) -- LGB Americans among the top 10 populations disproportionately affected by tobacco use, according to a new report by the American Lung Association.
Advertisement