Research suggests the need to reduce loud noises and boost beneficial sounds for babies in the NICU. 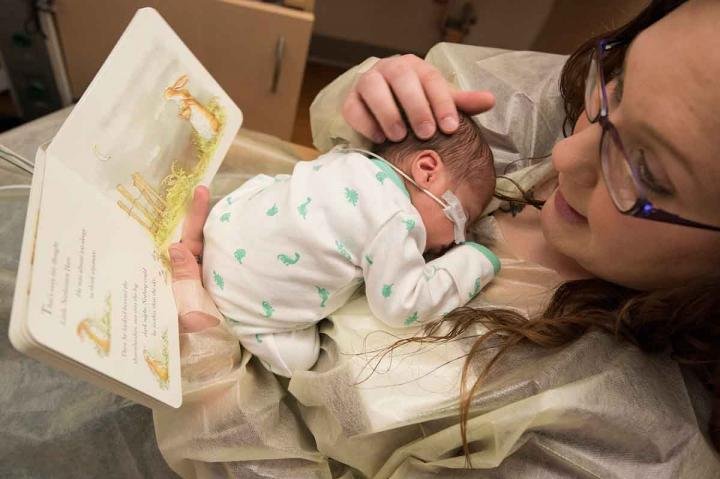 Nycole Tennant, of Trenton, Ill., reads a book to her son Kainen in the neonatal intensive care unit (NICU) at St. Louis Children's Hospital. While reading, Tennant also focuses on sensory interactions with her baby. Kainen and his twin sister, Kyzer, were born prematurely. Photo by Robert Boston

Feb. 8 (UPI) -- A study from Washington University School of Medicine in St. Louis has found that premature babies are exposed to unsafe noise levels in the neonatal intensive care unit, or NICU.

Researchers found that preemies were exposed to noise levels higher than what is considered safe by the American Academy of Pediatrics.

The study also showed that some preemies were not getting enough exposure to beneficial sounds like language and music that aid in early development. Preemies in private rooms in the NICU were exposed to long periods of silence compared to preemies in the unit surrounded by other babies.

"We know that some exposure to sound -- even among preemies -- can be beneficial," Bobbi Pineda, Ph.D., an associate professor of occupational therapy and of pediatrics and first author of the study, said in a press release. "But sounds don't occur alone. When parents talk to their newborns, they often also hold and caress their babies -- all things that help promote healthy development."

The study found that the sounds in the NICU are more mechanical in nature and different than the beneficial sounds of a human voice.

Previous studies showed that babies in private rooms in the NICU had poorer language development at age 2 than those in open hospital wards.

Pineda and Dr. Bradley L. Schlaggar, Ph.D., the A. Ernest and Jane G. Stein professor of neurology and director of the Division of Pediatric and Developmental Neurology, used digital language-processing devices to capture the sounds a preemie is exposed to in the NICU.

The devices were placed at the bedsides of 58 premature infants in the NICU at St. Louis Children's Hospital -- 33 in the open ward and 25 in private rooms. Each preemie was born at 28 weeks or earlier and the recordings were made within two weeks of the preemie's birth, again at 34 weeks and at 40 weeks.

The American Academy of Pediatrics recommends avoiding noise levels above 45 decibels. Results showed the average noise level in the NICU was slightly under 59 decibels. Peak noise levels were nearly 87 decibels.

"Often the noise we measured was coming from medical equipment that is essential to the baby's survival," Pineda said. "And this type of equipment is used in NICU units around the world."

The study also found that as babies neared their due date of 40 weeks, noise levels from medical equipment dropped significantly due to them needing less intervention. Researchers found that preemies exposed to sounds like their parent's voices benefited from the exposure.

The study was published in The Journal of Pediatrics.