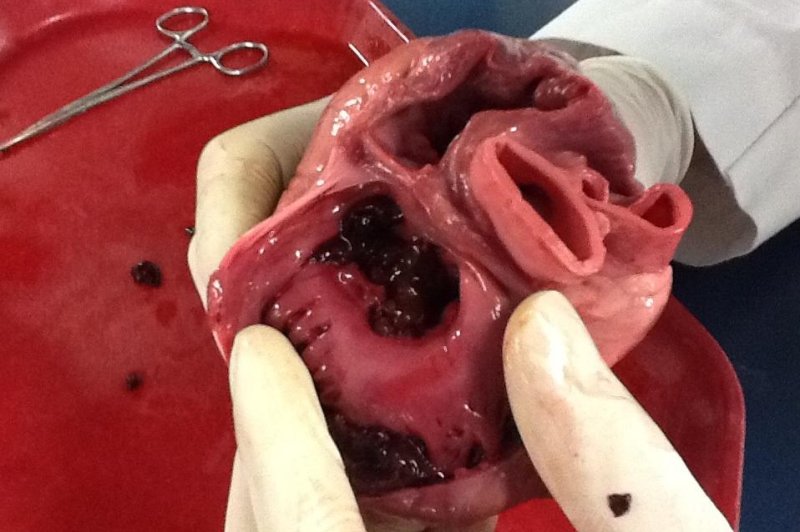 Researchers say their study confirms more elements of the genome are involved in gene expression than previously thought. Photo by Kenshinb.

Genetic enhancers are regions of DNA bound by proteins to increase the likelihood a particular gene will develop. During the study, published in the journal Nature Communications, researchers examined the role of two heart enhancers in mice. The loss of either one resulted in symptoms resembling human cardiomyopathy. The disease often leads to heart failure in humans.

"The cardiac changes that we observed in knockout mice lacking these enhancers highlight the role of noncoding sequences in processes that are important in human disease," co-author Axel Visel explained in a press release. "Identifying and interpreting sequence changes affecting noncoding sequences is increasingly a challenge in human genetics."

According to other researchers, the study confirms that more elements of the genome are involved in gene expression than previously thought.

"Prior to this work, no study had looked at what happens to heart function as a result of knocking out the heart enhancers in the genome," lead author Diane Dickel explained. "What was surprising to me was that outwardly, the knockout mice seemed fine. If you just looked at them, you wouldn't necessarily see anything wrong."

Dickel went on to concede that the human genome is far more complex than the mice tested in the experiment. There are about 20,000 genes in the mouse genome, compared to 80,000 candidate heart enhancers in the human genome.

Health News // 4 hours ago
'Shielding' elderly, ill does little to lower COVID-19 in absence of other strategies
July 27 (UPI) -- Older adults and those with chronic health conditions who self-isolate to reduce their risk for COVID-19 still are eight times more likely to get infected and five times more likely to die than those less susceptible.

Health News // 20 hours ago
Moderate drinking linked to lower heart attack risk, study says
July 26 (UPI) -- Drinking a bottle or two of wine a week may be associated with decreased risk of heart attack, stroke, angina or death among those with cardiovascular disease, according to a study published Monday in BMC Medicine.