Dialysis used more often in U.S. than other developed nations

More than 85 percent of U.S. patients with chronic kidney disease either received dialysis or were receiving it, far higher than other countries.

Most chronic kidney disease patients in the United States receive dialysis -- more than 85 percent -- regardless of age of potential efficacy for health, a starkly higher rate than that of other countries, say researchers at the University of Washington. Photo by Chaikom/Shutterstock

WASHINGTON, Sept. 23 (UPI) -- Compared to other developed countries, a significantly higher portion of chronic kidney disease patients in the United States received renal replacement therapy, or dialysis, raising questions about decision-making among clinicians who prescribe it.

More than 85 percent of patients in a recent study either received dialysis treatment or were preparing to start, according to a review of data published in the Clinical Journal of the American Society of Nephrology.

In most countries, dialysis is age-dependent and is less likely to be prescribed at older ages because it does not often save lives or improve condition, serving more purpose as a procedure of maintenance.

Recent observational studies have also suggested the treatment does not lengthen survival and has been linked with a poorer quality of life as opposed to other palliative approaches.

"Our findings signal more liberal use of dialysis in our study cohort as compared with other developed countries, with differences being especially striking for older age groups," Dr. Susan Wong, a researcher at the University of Washington, said in a press release.

For the study, researchers analyzed data collected by the U.S. Renal Data System, U.S. Department of Veteran Affairs and Medicare for 19,165 people between 2000 and 2009.

The researchers were surprised to find out that patients around age 85 received dialysis 51.2 percent of the time, despite it not being expected to improve either health condition or quality of life.

The rates of use in the United States are exceedingly high, researchers say, when considering 51.4 percent of eligible patients had dialysis and just 6.8 percent of people around age 85 had the procedure. In New Zealand and Australia, the numbers are similar: 51.2 percent of all eligible patients and less than 5 percent of those closer to age 85 have dialysis.

"Life expectancy after initiation of maintenance dialysis in very old patients is severely limited, and older patients experience high rates of hospitalization and transition to assisted nursing facilities after initiation of treatment," Wong said, adding that the study's "findings underscore the importance of shared decision-making for dialysis to ensure that treatment decisions uphold the priorities and preferences of individual patients and are grounded in realistic expectations about prognosis and the expected benefits and harms of this treatment."

Health News // 8 hours ago
Neonicotinoid insecticides harm bees even in small amounts
Aug. 2 (UPI) -- A type of insecticide, called neonicotinoids, is harmful to bees when applied to commercial crops, even at levels on par with instructions on their labels, according to a study published Monday.

Health News // 14 hours ago
Study: Texted nudge encourages hesitant people to get COVID-19 vaccine
Aug. 2 (UPI) -- Text messages are an effective way to remind unvaccinated people to schedule and show up for their COVID-19 shot, a study published Monday by the journal Nature found. 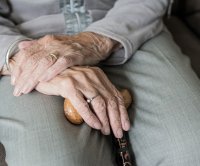 Health News // 3 days ago
CDC: Vaccinated people spread COVID-19 Delta variant as easily as unvaccinated
July 30 (UPI) -- The CDC on Friday released data showing that vaccinated people are at risk for COVID-19 infection, that they can spread the disease and that the Delta variant may be as contagious as chickenpox.
Advertisement