Cases of rare polio-like illness up sharply in 2016

CDC officials are concerned about the seemingly sudden increase in cases of acute flaccid myelitis.

The 36 cases of acute flaccid myelitis reported to the CDC so far this year are the most since 2014, the first year the agency tracked the condition. It appears AFM occurs in some children who contract enterovirus D68, though most children recover from the respiratory illness it causes and do not experience the paralytic condition. Photo by drpnncpptak/Shutterstock

ATLANTA, Sept. 21 (UPI) -- A sudden rise in cases of acute flaccid myelitis, a polio-like illness that first appeared in large numbers of children in 2014, has doctors concerned by a potential outbreak they understand little about.

There have been 32 new cases of AFM reported to the U.S. Centers for Disease Control and Prevention so far this year, the most since 120 children in 34 states were diagnosed with the condition during a five-month period in 2014.

AFM appears to start with a fever or respiratory illness before neurologic symptoms set in, slowly preventing movement of the limbs. Nearly all of the patients show inflammation of the gray matter in the spinal cord, with 85 percent of children showing some improvement in their condition, just three of the 120 diagnosed in 2014 have recovered fully.

The CDC reported the rise in cases seen since January, along with data from 2014, as it attempts to determine the cause of AFM and why the increase is being seen this year.

RELATED Mothers of children with autism at increased risk for heart disease: Study

"You hate to be an alarmist, but there's reason to have some concern," Dr. Avindra Nath, chief of the section of infections of the nervous system at the National Institute of Neurological Disorders and Stroke, told The Washington Post. "What we don't know is where are these cases. Are they clustered? Do they all look alike? Getting more information on these cases would be helpful."

The CDC says is started receiving an increase in reports of the disease between August and October 2014, the first year it started collecting data on AFM.

Photo by U.S. Centers for Disease Control and Prevention

Although the agency has found no specific cause of AFM, the cases are similar to illnesses caused by viruses. In 2014, the outbreak of AFM occurred at the same time of a national outbreak of enterovirus D-68, and the two were linked in studies at the time, but not much is known about the virus and not all children who contract it experience AFM.

"We are definitely hearing of cases from our colleagues across the country," said Dr. Teri Schreiner, a neurologist at the University of Colorado and Children's Hospital Colorado.

"It's a trend that's worrisome," she said, adding "what I'm hearing from others seems to be coming at a tempo similar to what happened in 2014." 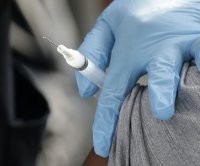