WHO: Antibiotics may soon be useless against gonorrhea

The agency released new treatment guidelines for gonorrhea, as well as syphilis and chlamydia, based on concerns of antibiotic resistance.

With growing resistance to antibiotics, the WHO released updated guidelines for the most effective antibiotics against gonorrhea, syphilis and chlamydia. Photo by Lightspring/Shutterstock

WASHINGTON, Sept. 1 (UPI) -- Antibiotics are quickly becoming ineffective for treating gonorrhea, and resistance to the drugs is growing for syphilis and chlamydia as well, according to the World Health Organization.

The WHO today released new guidelines for the treatment of all three sexually transmitted infections, ruling out an entire class of antibiotics for gonorrhea and suggesting more effective drugs for syphilis and chlamydia.

During the last year, the U.S. Centers for Disease Control and Prevention has issued several warnings about the gonorrhea's growing resistance to antibiotics, including a warning in July that the bacteria's resistance to the commonly used azithromycin had quadrupled during the last year and said in 2015 that that the drug cefixime was also losing efficacy.

Although the CDC recommendation of a combination therapy, azithromycin and ceftriaxone, remains effective for gonorrhea treatment, the WHO suggests doctors opt for antibiotics most effective against local resistance patterns. They recommend, however, that a class of antibiotics called quinolones not be used at all because of widespread high levels of resistance.

Antibiotic resistance to syphilis and chlamydia also has grown in recent years, but to a lesser extent according to WHO officials. The new guidelines do not deviate greatly from previous ones, though a strong suggestion for a single dose of benzathine penicillin for syphilis is recognized as the best treatment for the STI.

With chlamydia, which is the most common STI in the world and often is co-infected with gonorrhea, the agency recommends azithromycin and doxycycline remain first-line treatment options.

Antibiotic resistance is somewhat unpredictable -- the CDC reported gonorrhea's resistance has gone up and down erratically in recent years -- leading the WHO to recommend prevention or swift treatment as key to preventing the spread of all three and maintaining their susceptibility to antibiotics.

RELATED MRSA-killing antibiotic produced by bacteria in the nose

"Chlamydia, gonorrhea and syphilis are major public health problems worldwide, affecting millions of peoples' quality of life, causing serious illness and sometimes death," Ian Askew, director of reproductive health and research for the WHO, said in a press release. "The new WHO guidelines reinforce the need to treat these STIs with the right antibiotic, at the right dose, and the right time to reduce their spread and improve sexual and reproductive health. To do that, national health services need to monitor the patterns of antibiotic resistance in these infections within their countries."

Health News // 9 hours ago
Coffee may help lower odds for Alzheimer's disease, study suggests
Coffee lovers know a steaming cup of java can quickly deliver energy and mental clarity every morning, but new research suggests it may also guard against Alzheimer's disease in the long run. 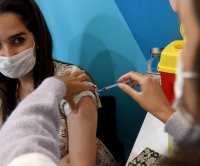 Health News // 12 hours ago
Study: Vaccinated, immunocompromised people still at greater COVID-19 risk
Nov. 30 (UPI) -- COVID-19 infections in people who are fully vaccinated are rare, but more common and severe among those with weaker immune systems, an analysis published Tuesday by the Journal of Medical Economics found.

Health News // 13 hours ago
Pfizer to seek FDA approval of COVID-19 vaccine boosters for teens
Pfizer Inc. is expected to seek approval this week for emergency use of its booster shots among American teens ages 16-17.

Health News // 19 hours ago
COVID-19 may trigger heart condition in young athletes
A heart condition, myocarditis, has been found in a number of U.S. college athletes who have had COVID-19, a new study finds.

Health News // 21 hours ago
Study: More years playing football means more brain lesions on MRI
A new study suggests that brain scans can reliably spot signs of sports-inflicted neurological damage while a person is still alive, and the study showed that more lesions show up on scans the longer a person plays.

Health News // 1 day ago
People with high blood pressure could be taking other meds that worsen it
Nearly 1 in 5 people with hypertension may be unintentionally taking a drug for another condition that causes their blood pressure to climb even higher, a new study suggests.
Advertisement