One-third of hospitals in poor countries have no running water, researchers say

In hospitals without continuous running water, it can be difficult to clean instruments, sheets, gowns, facilities and doctor's hands before and after surgical procedures, researchers say. Photo by vz maze/Shutterstock

BALTIMORE, June 22 (UPI) -- Running water is essential to providing basic healthcare, but in developing countries where the population lives without running water, doctors must weigh the danger of not washing hands, instruments or wounds during surgery against not performing a procedure at all.

More than one-third of hospitals in developing countries do not have running water, researchers at Johns Hopkins University found in a review of surgical studies.

Nearly 800 million people do not have access to running water, the U.S. Centers for Disease Control and Prevention reports, but researchers in the new study suggest lessons could be taken from countries such as Rwanda, which has expanded its water infrastructure to cover more than 83 percent of the country during the last two decades.

Hospitals without running water may have trucks deliver it or collect rainwater, though researchers say there is no way to know the cleanliness of rainwater, which is expected for use at medical facilities.

Basic healthcare requires running water, a lack of which the researchers say suggests instruments, sheets, gowns, facilities and even doctor's hands are not meeting basic safety guidelines for surgery and other health services.

"Hopefully, people aren't operating in those conditions," Dr. Adam Kushner, an adjunct professor at Johns Hopkins, said in a press release. "But what do you do if a woman shows up in obstructed labor and needs an emergency C-section and it's the dry season and the rain barrel is empty? You can't operate with dirty instruments, but if you don't she's going to die. This is the sort of dilemma that surgeons in these hospitals face."

For the study, published in the Journal of Surgical Research, researchers analyzed 19 surgical studies conducted between 2009 and 2015 that included water availability at 430 hospitals in 19 low- and middle-income nations.

"Running water is something we so take for granted and it doesn't exist in a third of hospitals in these countries," Kushner said. "Instead of water just being there, some hospitals truck in water or collect it in rain barrels, with no guarantee of its cleanliness. Without clean water, there is no way to clean surgeons' hands or instruments, wash gowns and sheets or clean wounds to prevent or reduce infections."

Advertisement
RELATED Fiber, vitamin A may prevent peanut, other allergies

Health News // 19 hours ago
Babies identify close relationships by saliva, study suggests
Sharing food and smooching are two ways babies can suss out whom they can depend on to take care for them, a new study suggests.

Health News // 20 hours ago
Vast number of new dads lead unhealthy lifestyles, survey finds
Jan. 21 (UPI) -- About 70% of new fathers in the United States are overweight or obese, while one in five is a smoker, according to the results of a national survey published Friday by the journal PLOS One.

Health News // 21 hours ago
CDC: Vaccines less effective against Omicron, but still reduce risk for serious illness
Jan. 21 (UPI) -- The COVID-19 vaccines available in the United States were less effective at preventing against infection after the Omicron variant of the virus emerged in November, according to data released Friday by the CDC. 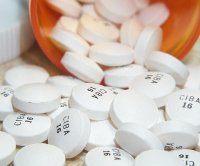