Helmet better than mask for patients with respiratory distress

Researchers at the University of Chicago stopped the study halfway through because the helmet was so much more effective. 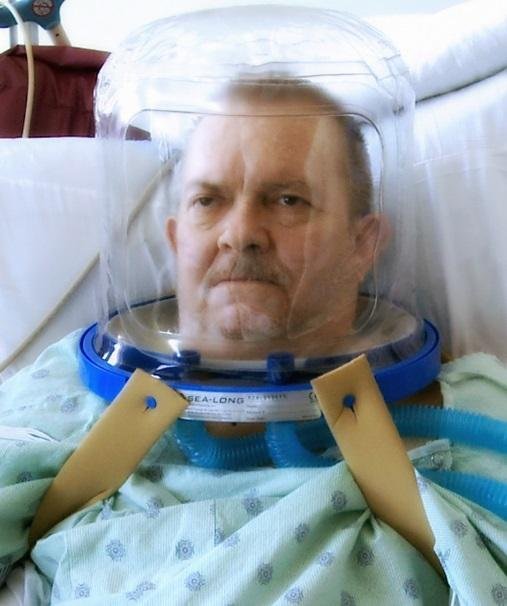 Using a helmet for breathing assistance confers several advantages over the face mask: It is less likely to leak, more comfortable, easier to tolerate and patients can see and speak through it, researchers found in a recent study. Photo by University of Chicago Medical Center

CHICAGO, May 17 (UPI) -- Patients who need breathing assistance fare better when given a helmet rather than a face mask, according to a recent study.

Doctors at the University of Chicago report the helmet helped patients in intensive care breathe better, recover faster and survive more often, and they stopped the study early because it was apparent face masks were exposing patients to greater health risk.

Non-invasive breathing assistance is meant to head off the need for intubation, which carries the risk of pneumonia, delirium and the need for strong sedatives because of the discomfort that comes with a tube placed through the mouth or nose into the trachea.

In addition to making it more tolerable for patients, who can watch television, read or carry a conversation from inside the helmet, masks strapped to the head and face are not airtight. The helmet surrounds the entire head, and is sealed with a soft, airtight collar around the neck, allows for air pressure and oxygen regulation.

"These findings build on a shifting paradigm where less is more in the care of critically ill patients," Dr. Bhakti Patel, a clinical instructor of medicine at the University of Chicago, in a press release. "We have chosen less sedation for more mental animation; less bed rest for more physical activity; and now we're choosing less intubations for more noninvasive ventilation."

For the study, published in The Journal of the American Medical Association, researchers recruited 83 patients at the University of Chicago Medical Center with acute respiratory distress syndrome who required at least eight hours of ventilation during treatment in the intensive care unit, randomly treating them with a standard face mask or the helmet.

Patients in the study had about a 50 percent risk for needing intubation or dying in the ICU, but patients treated with the helmet were significantly less likely to require intubation: 61.5 percent of patents in the mask group were intubated, while just 18.2 percent of those given a helmet required the tube.

Patients treated with the helmet had more than twice as many ventilator-free days as those with a mask, 28 days compared to 12.5 days, and 34.1 percent of patients in the helmet group died, compared to 56.4 percent of those given a face mask.

At the start of the trial, the researchers planned to enroll a total of 206 patients, but as data was reviewed during the study, the university's data and safety monitoring board recommended the trial be stopped early because the higher risk for patients given a mask was clearly much more significant.

While researchers say a much larger multi-center trial is necessary after seeing the efficacy with this group of patients, they also caution that previous studies have shown both methods of non-invasive ventilation can be beneficial depending on a patient's condition.

"Although the physics of various mechanical ventilation devices is similar," researchers at the University of California San Diego wrote in an editorial published alongside the study, "the interface used can have important implications for features of mechanical support possible, access of health care personnel to the patient, and comfort of the patient that may influence efficacy."