TUESDAY, May 10, 2016 -- Low doses of the anesthetic ketamine may quickly reduce suicidal thoughts in people with long-standing depression, a small study suggests.

By the end of three weeks of therapy, most of the 14 study volunteers had a decrease in suicidal thoughts and seven ended up not having any such thoughts, the researchers found.

To get into the study, patients had to have had suicidal thoughts for at least three months, plus persistent depression. "So, the fact that they experienced any reduction in suicidal thinking, let alone remission, is very exciting," said lead researcher Dr. Dawn Ionescu, an instructor in psychiatry at Harvard Medical School in Boston.

Despite these results, many mysteries still remain about the drug, Ionescu said. For example, "we don't know yet how the drug works," she said. "In addition, we do not know if the doses of ketamine being used for depression and suicide will lead to addiction -- more research is needed in this area."

The study used only intravenous ketamine, but oral and intranasal doses may also work, she added.

RELATED Obesity may not take years off your life: Study

Whether ketamine might ever become a standard therapy for depression and suicidal thoughts is also up in the air. "That is something we need to investigate," Ionescu said.

All of the study volunteers were being treated for major depressive disorder on an outpatient basis. They had all been experiencing suicidal thoughts for three months or more, and were resistant to other treatments, the researchers said. Eleven of the 14 volunteers were female, and their mean age was 50 years.

Ketamine, which is primarily an anesthetic, had been shown in other studies to quickly relieve symptoms of depression, Ionescu said.

For the study, two weekly intravenous infusions of ketamine were given over three weeks. The first three doses of ketamine were five times lower than typically given when the drug is used as an anesthetic. After initial treatment, the dose was increased.

Patients were checked before, during and after treatment, and every other week during three months of follow-up. Assessments included measurement of suicidal thinking, in which patients were asked how frequent and how intense their suicidal thoughts were, the study authors said.

Of the seven patients who stopped having suicidal thoughts, two continued to be free of both thoughts of suicide and symptoms of depression during the three-month follow-up, the findings showed.

No serious side effects from the drug were seen, the researchers said.

Two patients dropped out of the study. One dropped out because of the drug's side effects, and the other had a scheduling conflict, the researchers said.

All of the patients knew they were getting ketamine. The researchers are now finishing up a study in which some patients received the drug and others got a placebo.

Drugs currently used to treat suicidal thinking include lithium and clozapine, but these drugs can have serious side effects requiring careful monitoring of blood levels. Electroconvulsive therapy can also reduce suicidal thoughts, but its availability is limited and it can have serious side effects, such as memory loss, the researchers explained.

Cognitive behavioral therapy, a type of "talk" therapy, can also be an effective treatment for suicidal thinking, but may take weeks to months to be effective, the study authors pointed out.

Dr. Ami Baxi is director of adult inpatient services in the department of psychiatry at Lenox Hill Hospital in New York City. She said, "Ketamine, often used as an anesthetic in medicine, has been recently shown to cause a rapid antidepressant effect and reduce suicidal thoughts in patients with treatment-resistant depression."

However, this study has many limitations, she added. First, it was a very small study and "only two of the 14 patients were able to maintain this reduction three months after the infusion," Baxi said.

Second, patients knew they were receiving ketamine, "leaving them exposed to a possible placebo effect," she explained.

Baxi agreed this is a promising study, but it's too early to know the effects of ketamine on suicidal thinking. "Additional studies remain essential to enhance our knowledge on the psychiatric benefits of ketamine," she said.

The report was published in the May 10 online edition of the Journal of Clinical Psychiatry.

For more on depression, visit the U.S. National Institute of Mental Health. 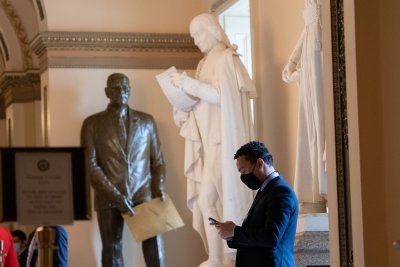