While traditional culturing of samples in a lab can take three to five days, the Polarization Anisotrophy Diagnostics system returns results in less than two hours. 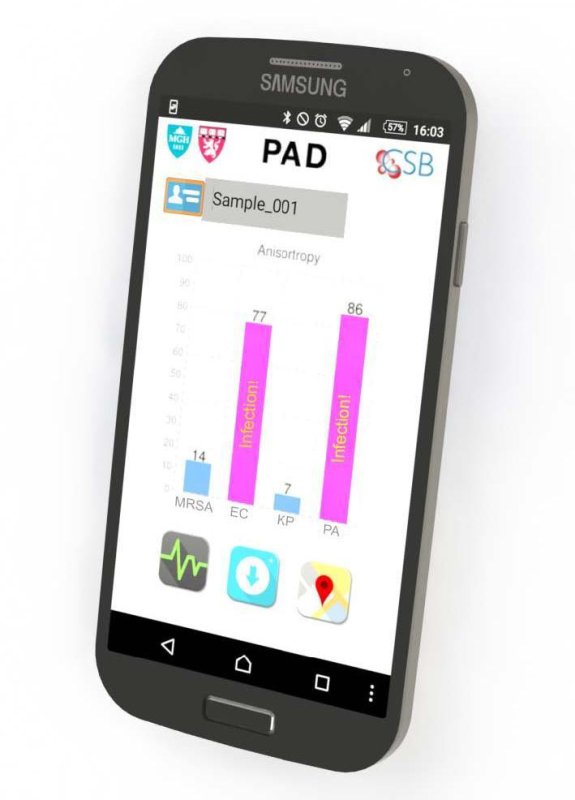 A smartphone readout from the Polarization Anisotropy Diagnostics, or PAD, system reveals the pathogens responsible for an infection and factors such as antibiotic resistance, according to scientists at Harvard Medical School who designed it. Photo by Dr. Chen-Han Huang and Dr. Ki Soo Park/Massachusetts General Hospital

BOSTON, May 9 (UPI) -- Diagnosing bacterial infections generally takes days, as samples have to be mailed to labs for tests requiring specific equipment, but scientists have designed a device that cuts the time for diagnosis down to a matter of hours.

Harvard Medical School scientists created Polarization Anisotropy Diagnostics, which can diagnose infections in less than two hours and send the results to a smartphone or other device on site, offering point-of-care diagnosis and faster, more effective treatment.

Although the device needs refining -- including the reduction of all functions of the system to a single machine, eliminating the need for separate cartridges to test samples, and expansion of the number of pathogens PAD tests for -- scientists say the system has great potential.

"We can see three immediate applications for a system that can provide such rapid and accurate results -- quickly diagnosing a patient's infection, determining whether antibiotic-resistant bacteria are present in a group of patients, and detecting bacterial contamination of medical devices or patient environments," Dr. Hakho Lee, an associate professor of radiology at Harvard Medical School, said in a press release.

For the proof-of-principle study, published in the journal Science Advances, scientists compared the quality of analysis and time to get results of blood tests for bacterial pathogens using their new PAD system and traditional culturing of samples, which requires being sent out to a lab.

Scientists tested samples for E. coli, klebsiella, acinetobacter, pseudonomas and staph aureus, as well as the virulence and antibiotic resistance of each. Both tests gave the same results, but bacterial culturing took between three and five days, while PAD took less than two hours.

Future development of the device includes testing probes for 35 other bacterial species, as well as working on lowering the cost of using PAD to less than $2.00 per test, scientists said.

"Health-care-associated infections are a major problem that affects more than 600,000 patients each year, more than 10 percent of whom will die, and incurs more $100 billion in related costs," said Dr. Ralph Weissleder, the Thrall Family Professor of Radiology at Harvard Medical School. "Rapid and efficient diagnosis of the pathogen is a critical first step in choosing the appropriate antibiotic regimen, and this system could provide that information in a physician's office in less than two hours."