More than half of Hispanic mothers in a study described their overweight or obese children as being a healthy weight, researchers say.

Early intervention by nurses and doctors with mothers who misunderstand their children's weight as healthy when the child is overweight or obese could help prevent adult obesity, researchers at the University of Houston found in a recent study. Photo by ChiccoDodiFC/Shutterstock

HOUSTON, April 20 (UPI) -- Obesity and malnutrition in children are tied to mothers' perception of weight as it relates to health, resulting in more than half of parents in a recent study thinking their overweight or obese child has a healthy weight.

Researchers at the University of Houston found in a study of low-income immigrant Hispanic mothers that the way they viewed their children's weight was often based on their own views of weight.

Mothers who were worried about becoming overweight or obese were less likely to link weight with health, and some mothers less worried about their children being overweight thought they would not have weight problems as they got older, according to the study, published in the journal Public Health Nursing.

A study last year found nearly three-quarters of men and two-thirds of women in the United States are overweight or obese. Without intervening early, researchers involved with the new study suggest it will become increasingly difficult to tackle the national obesity epidemic.

The researchers suggest nurses make recommendations to parents about diet, sleep and physical activity as a method of intervening early to prevent them from being obese later in life.

"Mothers seem to link 'health' with 'weight,'" Dr. Daphne Hernandez, an assistant professor at the University of Houston, said in a press release. "They may believe that more weight is needed to help improve the child's health. The mentality that a 'chubby baby is a healthy baby' may still be preferred. So the way mothers perceive their children's health appears to be closely tied to their weight status."

For the study, the researchers analyzed data on 96 low-income Hispanic mothers and their young children, finding 54 percent of mothers with an overweight or obese child perceived their child as "about the right weight."

Nurses, especially bilingual ones, should develop screenings and interventions to advise on better diet options -- more fruits and vegetables, less sugary drinks and snacks -- and increasing both physical activity and sleep, Hernandez said.

"It is difficult to decrease the childhood obesity prevalence rates if parents are not able to accurately detect that their children are overweight or obese," Hernandez said. "They may perceive that their child will not have weight problems in the future once he grows taller or becomes older, but the situation clearly requires an intervention that explains and promotes a healthy lifestyle."

Health News // 4 hours ago
Cigarette sales jumped during COVID-19 pandemic, study says
As COVID-19 has surged throughout the United States for the past year and a half, some may have picked up an old bad habit or started a new one.

Health News // 5 hours ago
Health benefits of nuts may boost survival, limit recurrence in breast cancer
Oct. 20 (UPI) -- Regular consumption of peanuts, walnuts and other nuts boosts survival and reduces risk for disease recurrence in people with breast cancer, a study published Wednesday by the International Journal of Cancer found.

Health News // 6 hours ago
Most teens with depression, substance use issues don't get simultaneous care
Oct. 20 (UPI) -- Fewer than 5% of teens in the United States suffering from major depression and substance use disorders receive treatment simultaneously for the conditions, a study published Wednesday by JAMA Network Open found.

Health News // 7 hours ago
Poll: U.S. parents worried kids fell behind in school during pandemic
It is a fear that millions of parents have been harboring since the pandemic began: Will their children fall behind in school due to disruptions caused by lockdowns, closings and social distancing? 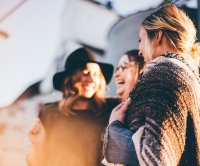