About half the patients treated with baricitinib saw significant reductions in the number of joints affected by arthritis after 12 weeks of treatment. 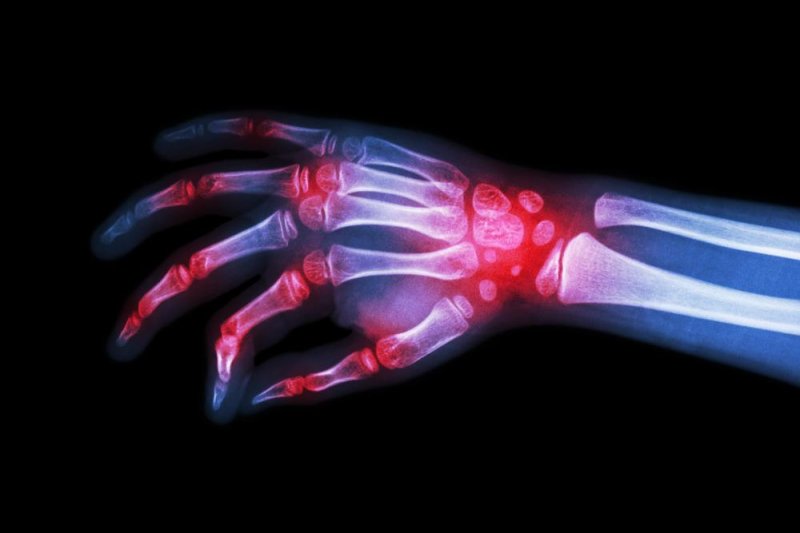 A clinical trial for baricitinib shows its efficacy in reducing the number of joints affected by rheumatoid arthritis in patients for whom other treatments don't work. Fifteen to 20 percent of patients with rheumatoid arthritis, which affects smaller joints such as those in the hands and feet, find decreasing efficacy of drug treatments over time, leaving them with few options for the condition. Photo by Puwadol Jaturawutthichai/Shutterstock

STANFORD, Calif., March 31 (UPI) -- A new drug reduced the number of affected joints in patients with refractory rheumatoid arthritis that has lessening or no response to other treatments, according to an international clinical trial.

The drug, baricitinib, reduced the number of affected joints in about half the study's participants, offering a potential treatment for people with few options to ease the progressive condition.

Rheumatoid arthritis affects 1.5 percent of people in developed countries, causing pain stiffness, swelling and the destruction of small joints, such as in the hands and feet.

Although drugs have been effective in blocking immune mechanisms to reduce inflammation, many patients find the drugs lose their efficacy, carry significant side effects or both.

"The drug worked well across all patient subgroups, independently of what they'd been taking before or how long they'd had the disease," Dr. Mark Genovese, a professor of immunology and rheumatology at Stanford University, said in a press release.

Results of the phase 3 trial were similar to three previous trials, all of which showed the drug reduced symptoms and prevented structural damage in joints.

"This is the first drug to demonstrate meaningful clinical benefit in patients who've failed virtually every other commercial drug for rheumatoid arthritis," Genovese said.

Health News // 12 hours ago
Ban on fruit-flavored e-cigarettes didn't reduce vaping
A new survey of adult e-cigarette users finds that after fruit-flavored vaping products were banned, most vapers switched to flavored products not covered by the ban, or even went back to smoking traditional cigarettes.

Health News // 12 hours ago
Sensor to monitor toilet sounds could identify cholera outbreaks
A small toilet-based sound sensor that can tell the difference between peeing, pooping and diarrhea may one day help prevent cholera outbreaks.