The Sterile Box is a solar-powered medical tool sterilization facility built into a standard 20-foot steel shipping container that can be set up anywhere. 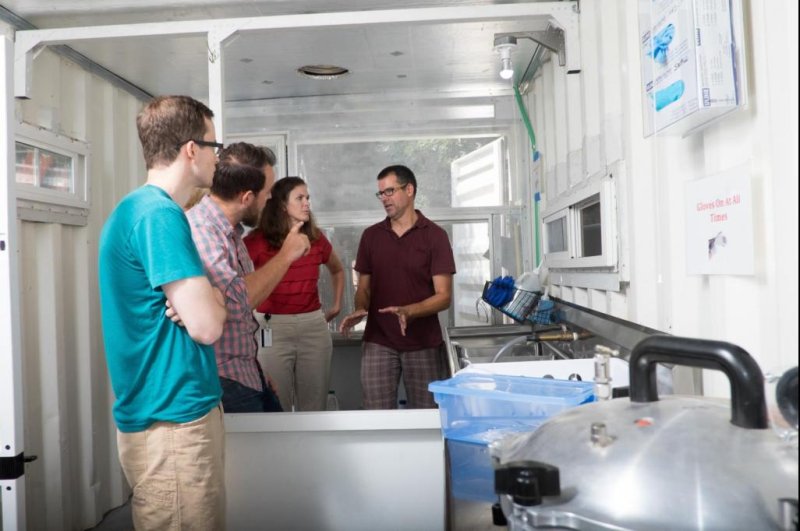 Rice University professors Maria Oden, second from right, and Douglas Schuler, right, give visitors a tour of the Sterile Box prototype. The unit was designed to sterilize and process surgical instruments in low-resource settings. Photo by Jeff Fitlow/Rice University

The Sterile Box is a full, solar-powered sterilization facility built into a standard 20-foot steel shipping container that can be set up anywhere, researchers said in a press release.

"Infection control in the surgical suite really is a big challenge in the developing world," said Maria Oden, director of the Oshman Engineering Design Kitchen at Rice University. "I was shocked to learn how many surgeries end up with patients developing some manner of infection."

The researchers had previously worked on a standalone device to sterilize tools, but started thinking bigger because of the lack of facilities in rural and developing areas.

In designing the portable facility, the researchers worked to consider water and energy requirements and availability, and wanted to make it easy to avoid human error in construction or use.

"The box looks at the problem from a complete system level and makes it easy to implement," Oden said. "It's not just a simple device to clean and sterilize the tools, but a way to manage the process."

The box, a standard 20-foot steel shipping container, is separated by a small foyer into four areas for decontamination, preparation, sterilization and drying and storage, all of which are partitioned off by a half-wall.

Power for the unit is generated by solar panels on the roof, and water is supplied by a 55-gallon receiving tank on the ground and 50-gallon tank on the roof. A non-electric, gravity steam sterilizer, heated with a custom-designed 750-watt hotplate, is used to sterilize instruments.

In a study, published in the journal PLOS ONE, the researchers report instruments were properly decontaminated and sterilized in 61 trials of the Sterile Box between May and August 2015 for a failure rate of 0 percent.

"We tried to really think hard about social context," said Douglas Schuler, an associate professor of business and public policy at Rice. "We laid out the elements to minimize human error and water and energy requirements to the extent that we can. I really like that about our design."

The researchers are working with researchers at the Baylor College of Medicine to incorporate their design into a mobile surgical suite expected to be sent to the Malawi capital of Lilongwe in 2017 to see how it performs in the field.

Health News // 4 hours ago
Banking stool samples may improve healthy aging
Banking samples of your own poop in your youth and then transplanting them back when you're old might be a key to healthy aging, scientists suggest.

Health News // 16 hours ago
Cancer survivors at greater risk for heart disease, study shows
If you survive cancer, you're more apt to have heart trouble later on, a new study shows.

Health News // 19 hours ago
Many parents are lax on fireworks safety to protect kids
Many U.S. parents don't take proper precautions to protect their children from fireworks-related burns and injuries, claims a new survey released just ahead of the Fourth of July.

Health News // 23 hours ago
Newly identified gene may be reason women have greater risk of Alzheimer's
WASHINGTON, June 30 (UPI) -- New research has identified a novel gene for Alzheimer's disease in women, furthering efforts to explain why the disease is more prevalent in females than males.
Advertisement