Tarantula toxin may be used as powerful painkiller

A molecule found in the poison of the Peruvian green velvet tarantula could hold the key for less addictive, more powerful painkillers.

The peptide toxin, in blue, isolated from the Peruvian green velvet tarantula, binds to neuronal cell membranes and inhibits the pain receptor NaV 1.7, in orange, at the cell membrane surface. Photo by Sónia Henriques/University of Queensland

WASHINGTON, Feb. 29 (UPI) -- Researchers in Australia have identified a peptide in the Peruvian green velvet tarantula's venom that may work as a more effective, less addictive painkiller, according to a new study.

In addition to the peptide discovery, researchers reported a new role the cell membrane can play in the efficacy of drugs on pain receptors, which could help other studies on the painkilling potential of other substances.

The goal, researchers said, is to find painkillers with fewer side effects and addictive qualities that can control pain as well as or better than current options.

The finding was reported as part of a presentation at the annual meeting of the Biophysical Society, where researchers showed the potential medical uses for ProTx-II, a peptide toxin found in the venom of the Peruvian green velvet tarantula.

Researchers at Yale identified the tarantula's toxin as a potential painkiller in 2014 after screening more than 100 spider toxins that could blunt activity in pain-sensing neurons.

Building on this, researchers at the University of Queensland sought to understand how the toxin prevents activity in the neurons, potentially alleviating pain, in order to turn the poison into a usable treatment.

By studying the structure of the ProTX-II molecule, researchers sought the precise peptide-receptor to which it binds on the surface of cells and the role of the cell membrane in allowing it to do so.

"Our group is specifically interested in understanding the mode of action of this toxin to gain information that can guide us in the design and optimization of novel pain therapeutics," Sónia Henriques, senior research officer at the University of Queensland, said in a press release.

For the study, published by the Biophysical Society ahead of the conference, the researchers used nuclear magnetic resonance spectroscopy to illustrate the structure of the peptide. They also used surface plasmon resonance, fluorescence and molecular simulations to visualize interactions between the peptide and the neuronal cell membrane. 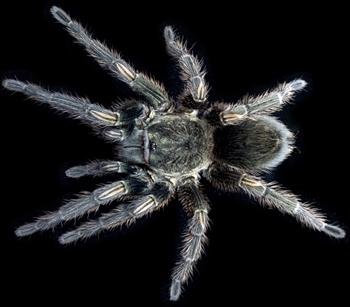 Future research, based on the understanding of how the molecule works, will focus on designing a toxin drawn more toward binding with the cell membrane, with fewer side effects or addictive qualities than most commonly used painkillers.