Novel oxygen treatment saves life of baby before, after birth

The baby's mother was treated with oxygen before he was born, which may have allowed treatment after birth to be more effective, doctors say. 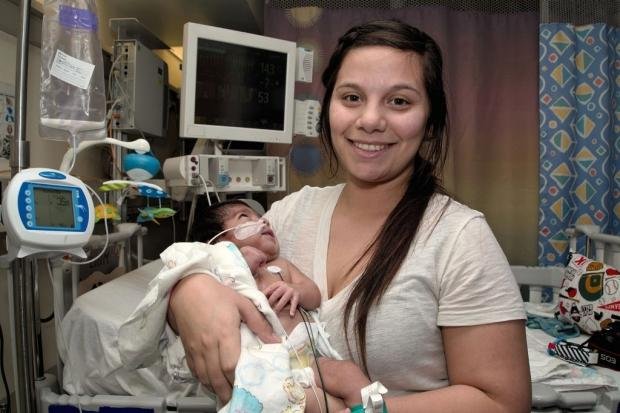 Linda Luna holds her son, Liam, who was born at Lucile Packard Children’s Hospital Stanford with the rare heart defect congenital Ebstein’s anomaly. Doctors used a novel oxygen treatment with Linda to keep Liam alive in utero, and were prepared for the series of surgeries that would be necessary to save his life after he was born. Photo by Robert Dicks/Stanford University

STANFORD, Calif., Feb. 18 (UPI) -- Using a novel oxygen treatment with his mother, doctors helped a fetus survive until birth and then saved his life with immediate surgery to repair a heart defect that may have killed him before he was born.

Doctors at Lucile Packard Children's Hospital Stanford started planning for Liam Luna's congenital Ebstein's anomaly, which they said gave him a 90 percent chance of dying either before or just after birth if nothing was done.

Congenital Ebstein's anomaly is a malformed heart valve that does not close properly and allows blood to flow back from the lower to the upper chamber of the heart.

"Once you see the type of leakage Liam had, it's usually a progressive process," said Dr. Theresa Tacy, an associate professor of pediatrics at the School of Medicine at Stanford University, in a press release. "It just gets worse: The fetus eventually develops heart failure and dies."

Tacy had treated two pregnant mothers and fetuses with the condition, using the drug indomethacin to constrict a blood vessel near the babies' hearts to cause more blood to flow to their lungs -- which helped both babies survive until birth, however they died soon after.

After the defect was found, Tacy tried a new approach for Liam's mother, Linda, giving her high-flow oxygen for 12 hours per day through a face mask beginning when she was 33 weeks pregnant. The idea was the same -- to relax blood vessels so they could carry more blood and oxygen to Liam's lungs -- though in this case the oxygen came from his mother rather than by using a drug.

Linda's liver function declined during the following few weeks after the oxygen treatment was started, prompting doctors to monitor her in the hospital around the clock. She started having contractions about a month before Liam was due, with doctors opting to deliver him by C-section because of an unstable heart rate.

RELATED Antidepressants during pregnancy may not increase heart defect risk

When he was born, Liam was immediately put on an extracorporeal membrane oxygenation machine to deliver oxygen to his blood and rushed him to surgery to repair a blood vessel near his heart that would help blood flow in the right direction.

Doctors say they had to balance the risks of keeping Liam on the ECMO machine, which requires blood thinners that put a newborn at risk of bleeding and stroke, as well the machinery itself exposing him to air bubbles and tiny blood clots that can increase the risk for stroke. After two weeks on the machine, once he could breathe on his own, doctors repaired the rest of the defect, correcting his heart valves and reducing the size of the right atrium.

"This is just one case, but it's so exciting to move forward and feel a glimmer of what we think is the right path for treating other babies with this devastating heart defect," Tacy said.

Health News // 54 minutes ago
Those who return to work after loss of spouse may face increased challenges
People who returned to work within three months of losing a spouse had higher perceived stress levels and greater systemic inflammation than retirees who had lost their partner, a new study found.

Health News // 1 hour ago
Asking teens about suicide may raise odds they'll get help
Teens who were asked about their thoughts of self-harm were seven times more likely to be identified at-risk for suicide, and four times as likely to initiate treatment, a new study found.