Treating all hepatitis C patients with the drug Harvoni earlier could lead to better health outcomes and save more than $3 billion per year.

Hepatitis C infection can cause liver cancer, liver transplants, and liver-related death if not treated. The drug Harvoni can cure it but is often delayed because insurance companies are slow to approve it due to its high cost. Photo by Green Apple/Shutterstock

SAN FRANCISCO, Nov. 25 (UPI) -- Treating hepatitis C patients with an expensive drug early can prevent liver damage and other health complications that are more costly to deal with when the infection has progressed, according to a new study.

Hepatitis C infection can cause liver cancer, liver transplants and liver-related death, all of which can likely be prevented by treating patients with the drug Harvoni.

While Harvoni can cost as much as $100,000 for a full course of treatment, researchers at the University of California San Francisco found in a new study that using it earlier than many insurers are willing to pay can effectively cure the chronic infection, saving money and preventing patients from dealing with more significant diseases.

The researchers note in the study, published in JAMA Internal Medicine, that most patients are eventually treated with the drug, but by waiting until hepatitis C infection has progressed, other complications must be addressed along with the actual virus.

RELATED CDC: More people could be protected from HIV with daily pill

"The budgetary implications of widespread treatment are quite large at current drug prices," said Dr. James Kahn, a professor in the UCSF department of epidemiology and biostatics, in a press release. "However, these costs are time-limited, and they are lower than some other treatments that are less effective. In the U.S., we spend more than $140 billion a year treating cancer, often with less health benefit than is provided by the new hepatitis C treatments."

Researchers used patient data and drug cost to simulate treatment for 1000 individuals with hepatitis C, estimating health complications and costs of treating patients at each of the four stages of liver fibrosis associated with the infection.

Based on analytical models, the researchers said treating half of all currently infected patients who know they are infected but haven't been treated would cost about $53 billion over five years. If only those patients at stages three and four were treated, it would cost about $30 billion.

The $23 billion difference, however, could be moot because at some point many of the patients not treated with Harvoni before stage three are likely to get it later -- when more money has been spent on other treatments. Treating patients at all stages, however, could save about $3.3 billion on lifetime healthcare costs.

"The benefits of early therapy are significant, since it increases the number of healthy life years for patients and decreases their chances of getting serious liver diseases, like liver failure and liver cancer," said Dr. Harinder Chahal, an assistant adjunct professor in the UCSF department of clinical pharmacy. "But the current prices are keeping early treatment out of reach for many patients, and this needs to be addressed."

Health News // 6 hours ago
Bicycle-, gun-linked injuries rose during COVID-19 lockdowns, study finds
In yet another example of the cost of the pandemic, a new study finds there were significant increases in bicycle- and gun-related injuries during coronavirus lockdowns in the U.S., but a decrease in traffic injuries.

Health News // 17 hours ago
Study: 87% of excess lung cancer risk eliminated if smokers quit before age 45
Smokers who kick the habit before age 45 can nearly eliminate their excess risk of dying from lung or other cancers, a new study estimates.

Health News // 21 hours ago
Study: COVID-19 vaccination does not raise odds for miscarriage
COVID-19 vaccines don't increase the risk of miscarriage in early pregnancy, according to a study that adds to previous research showing the vaccines are safe for pregnant women.

Health News // 22 hours ago
Study: More than 1 in 7 teens, adolescents in U.S., Canada have vaped pot
Oct. 25 (UPI) -- More than one in seven adolescents and teens in the United States and Canada has vaped marijuana in their lifetimes, an analysis published Monday by JAMA Pediatrics. 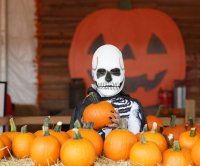 Health News // 1 day ago
Pumpkin carving is top cause of Halloween injuries
Your Jack-o'-Lantern may be more than scary -- it could be dangerous. Pumpkin carving is the leading cause of injuries associated with Halloween, according to the U.S. Consumer Product Safety Commission.

Health News // 3 days ago
Deadly liver disease tied to obesity is on the rise
Obesity and diabetes are becoming an even more dire threat for potentially fatal liver damage, a new study reveals.
Advertisement