Young children with autism may benefit from oxytocin treatment

Oxytocin may be the first drug treatment to effectively improve behavioral issues in autistic children.

The potential of oxytocin drug treatments to help children with autism could make other therapy-based treatments more effective, researchers said. Photo by PhotoUG/Shutterstock

SYDNEY, Oct. 27 (UPI) -- Young children with autism in a small study who were treated with the synthetic hormone oxytocin showed improvement in social, emotional and behavioral issues. It is thought to be the first effective drug treatment for social impairments associated with autism.

Behavioral therapy has been shown to help children with autism, however it can be time-consuming and costly.

"The potential to use such simple treatments to enhance the longer-term benefits of other behavioural, educational and technology-based therapies is very exciting," said Adam Guastella, an autism researcher at the University of Sydney, in a press release.

Researchers worked with 31 children with autism, giving them either an oxytocin or placebo nasal spray twice a day for five weeks. Compared to the placebo, researchers said more parents reported improvements in behavioral issues with children who were given oxytocin.

"We used some of the most widely used assessments of social responsiveness for children with autism," Guastella said. "We found that following oxytocin treatment, parents reported their child to be more socially responsive at home."

The study is published in Molecular Psychiatry.

Stanford researchers using Google Glass to help autistic kids Genetic analysis: Rare mutations cause half of all autism cases Increase in prevalence of autism due to changing diagnoses

Health News // 4 hours ago
More than 95% of Americans made lifestyle changes for COVID-19
April 7 (UPI) -- Since the coronavirus outbreak exploded in early March, 95 percent of people in the United States have made changes to their lifestyle, including stockpiling food and practicing social distancing, researchers report.

Health News // 7 hours ago
Women are safer drivers than men, British study finds
If more women were hired for trucking jobs, the roads would be a lot safer, British researchers suggest.

Health News // 13 hours ago
Technology preserves bonds in addiction treatment during COVID-19 crisis
Everyone is struggling with isolation as much of the world hunkers down to slow the spread of COVID-19, but this time poses even greater hazards for folks recovering from addiction, experts say.

Health News // 15 hours ago
Some steroid medications may raise coronavirus risk
People taking a certain class of steroids for inflammatory conditions such as asthma, allergies and arthritis may be at increased risk from the new coronavirus, experts say.

Health News // 23 hours ago
New drug shows promise for pneumonia caused by COVID-19, study finds
April 6 (UPI) -- Researchers have identified a new drug that reduced the lung damage associated with COVID-19 in human lung cultures and mice, but it still needs to be tested for safety and efficacy in humans. 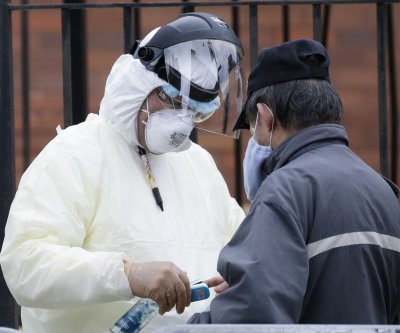 Health News // 1 day ago
Trials begin for potential COVID-19 drug remdesivir
A drug originally developed to treat Ebola is getting a second chance in the spotlight, as research teams in the United States, Asia and Europe race to test it against the new coronavirus.