In animals, the protein restored heart function significantly and prevented some scarring of the organ after a heart attack. 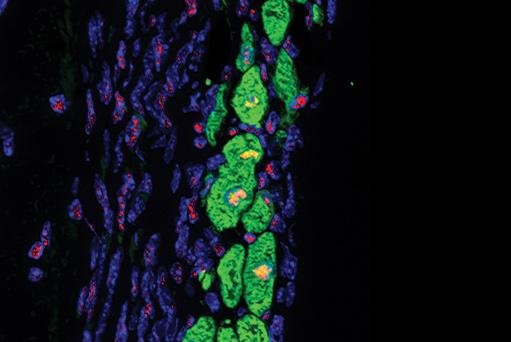 Researchers spurred new heart muscle cells, shown above in green with yellow nuclei, in a mouse heart after it had a heart attack by implanting the protein-loaded patch into the animal. Photo by the University of California San Diego

SAN DIEGO, Sept. 16 (UPI) -- Most people survive heart attacks immediately, but the damage to the muscle and scarring that results takes a toll that eventually leads to heart failure -- of which many patients die within five to six years of developing.

Using a protein that helps cardiac cells replicate, researchers found they can spur the growth of new cardiac muscle by delivering the protein to the heart using an implantable patch that returned animal hearts to nearly normal function within weeks.

Researchers looked to a variety of animals whose hearts appear to have regenerative qualities, eventually looking at epicardial cells, which are found in the outer layers of the heart, and stimulate existing heart muscle cells to replicate. Using mass spectrometry, the researchers identified Follistatin-like 1, or FSTL1, as the protein motivating replication.

The researchers then developed a patch made of collagen that has the elasticity of fetal heart tissue and can slowly release FSTL1 from its center. The patch was tested with mice and pigs, showing that it stimulated new muscle growth in the animals after they had had a heart attack.

In pigs who'd had a heart attack, blood flow in the left ventricle of their hearts dropped from a normal rate of 50 percent to 30 percent. Researchers implanted the patch within a week of the heart attack. The animals showed less scarring on their hearts, and the organ's function was restored to a stable 40 percent.

Researches say it might be possible to test the patch in human clinical trials as early as 2017.

The study is published in Nature.