Researchers think it could serve as an early warning system for cancer spreading through the body. 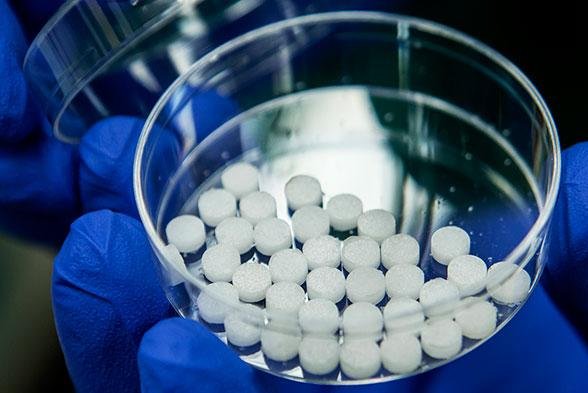 The tiny implants are inserted under the skin, attracting cancer cells in the system that have broken off from primary breast cancer tumors. Photo by University of Michigan

WASHINGTON, Sept. 9 (UPI) -- Researchers have created an implant that soaks up metastatic cancer cells like a sponge, which researchers think could be used as an early warning system to detect the spread of cancer in a patient's body.

The hope is for women at high risk for breast cancer, such as those who've had a tumor removed, could be monitored for the presence of cancer cells. Not only would this tip off doctors that a patient may have a recurrence of cancer, but they could analyze the cells to find the best course of treatment.

"Breast cancer is a disease that can recur over a long period in a patient's life, and a recurrence is often very difficult to detect until the cancer becomes established in another organ," said Jacqueline Jeruss, an associate professor of surgery at the University of Michigan, in a press release. "Something like this could be monitored for years and we could use it as an early indicator of recurrence."

The implant, made of a biomaterial used in medical devices, is inserted into abdominal fat or under the skin. A signalling molecule called CCL22 in the implant attracts immune cells -- the body's natural reaction to something foreign -- which then attract cancer cells to it.

Researchers tested the implants in mice who'd had breast cancer, finding it attracted circulating cancer cells within about two weeks.

While they trapped cancer cells before they migrated to other parts of the body, researchers said the implants are most likely best for detecting the presence of cancer rather than as an anti-cancer treatment.

Experiments with some mice showed that a scanning system optical coherence tomography, or OCT, would allow cells in the implant to be detected without removing it. There are companies working on smartphone apps that would allow OCT to be done with a smartphone, according to New Scientist.

"We need to see if metastatic cells will show up in the implant in humans like they did in the mice, and also if it's a safe procedure and that we can use the same imaging to detect cancer cells," Lonnie Shea, a professor at the University of Michigan, told the BBC. "This could be the canary in the coal mine. That's the fantasy."

The study is published in Nature Communications.

RELATED Arthritis may increase risk of falling into poverty