WASHINGTON, May 27 (UPI) -- As cancer detection and treatment are now handled in many cases at the genetic level -- such as tests for genetic mutations among potential patients -- a team of researchers has published a study suggesting professionals not run tests which have yet to be proven relevant to breast, ovarian or other types of cancer.

Additionally, a separate study has found that the mental fallout from a false positive breast cancer diagnosis, be it from physical exams, mammograms, biopsy or surgery, continues for years beyond the non-diagnosis.

Researchers questioned genetic tests which look for mutated genes that may increase risk of breast cancer. Many of the tests review more than 100 genes, while only 21 of them have been found to be indicative of potentially developing breast cancer, according to the paper published in The New England Journal of Medicine.

Many researchers have pointed out that tests are giving doctors more data than they know what to do with, in many cases because research has not yet caught up to the amount of information that can be collected.

"We're in a time where the testing technology has outpaced what we know from a clinical standpoint. There's going to be a lot of unknown variants that we're going to have to deal with as more patients undergo large genetic testing panels," said Kara Maxwell, MD, PhD, a fellow in the division of Hematology and Oncology in the Perelman School of Medicine at the University of Pennsylvania, in a press release. "It's crucial that we figure out the right way to counsel women on these issues, because it can really provoke a lot of anxiety for a patient when you tell them, 'We found a change in your DNA and we don't know what it means.'"

After reviewing genetic markers that many tests target, researchers said there is not nearly enough data to fairly judge if a mutation will lead to cancer and collecting data from actual patients awaiting answers may not be reliable for judging cancer risk as it happens.

"As the costs of sequencing decline, it is inevitable that the use of gene-panel testing, and indeed whole-exome and whole-genome sequencing, will become widespread," researchers wrote. "Therefore, there is an urgent need for much larger, well-designed population- and family-based studies in diverse populations that will provide reliable estimates of risk for the purpose of counseling."

Genetic testing has been added in recent years to examination, mammogram and surgical methods of checking for cancer, however false positives are still a concern.

The study found the negative effects of a false positive mammogram result were no worse if the followup exam was more invasive than not.

"Our new study shows that facing a potential breast cancer diagnosis has a negative effect," said Bruno Heleno, Ph.D., of the Research Unit for General Practice at the University of Copenhagen, in a press release. "It now turns out that there is no difference between having to undergo a physical examination or surgery. Being told that you may have cancer is what affects, stresses and worries you." 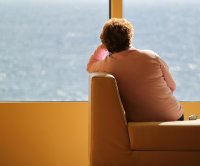