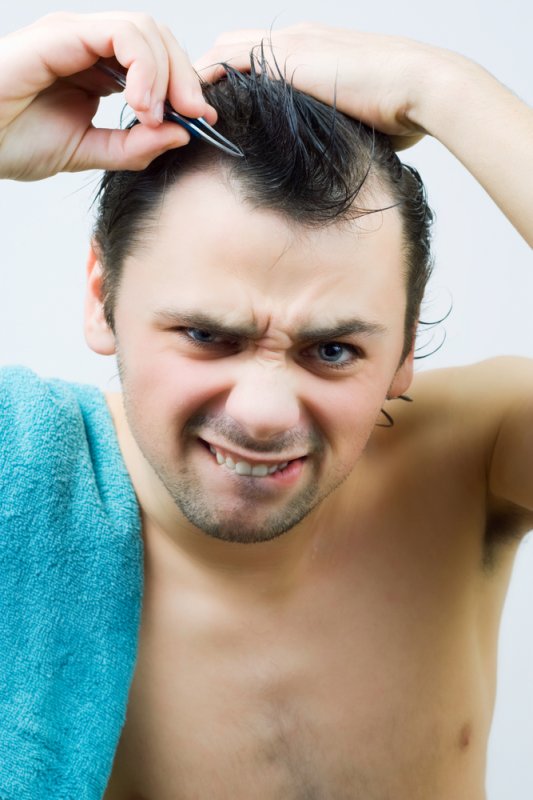 LOS ANGELES, April 10 (UPI) -- By age 50, nearly half of all men will exhibit signs of male-pattern balding -- a V-shaped receding hairline and thinning on the crown of the head. But new research suggests strategically plucking hair follicles can encourage regrowth.

In a study at the University of Southern California's Keck School of Medicine, researchers found that plucking a specific amount of hair in a precise pattern results in significant regeneration.

The idea-turned-experiment began when visiting scholar Chih-Chiang Chen arrived in Los Angeles from the National Yang-Ming University and Veterans General Hospital in Taiwan. Chen had been studying the effects of hair follicle injuries. His research showed that surrounding follicles are coaxed into overdrive when a nearby injury is detected.

He hypothesized that by plucking hairs scientists could trick local follicles into thinking an injury had occurred. So Chen and his colleagues tested different pluck patterns and methods. Mice served as the first test subjects.

When plucking hairs in a low-density pattern from a loosely defined area, no regrowth was observed. But when researchers plucked hairs from a highly concentrated area -- a circle ranging from 3 to 5 millimeters -- significant follicle regeneration occurred. By plucking just 200 hairs, researchers encouraged the sprouting of anywhere from 450 to 1,300 new hairs, both inside and outside the plucked area.

"It is a good example of how basic research can lead to a work with potential translational value," lead researcher Cheng-Ming Chuong, a professor of pathology at the Keck School, explained in a press release. "The work leads to potential new targets for treating alopecia, a form of hair loss."

Researchers say their findings illuminate the idea of "quorum sensing," a process that dictates the reactive behaviors of a group. The concept describes how a group responds to stimuli that affects some but not all. By varying the number and concentration of plucked hairs, researchers honed in on the critical threshold required for the hair follicles to react in concert.

RELATED One-dose Ebola vaccine to be tested on humans

Once the threshold -- or "quorum" was met -- local immune cells sent out chemical signals calling for a response (in the form of new hair).

"It's a really nice piece of science. The idea of quorum sensing is smart," Chris Mason, a professor of regenerative medicine at University College London, told BBC News.

It's not clear, however, whether the new science can actually help cure or treat baldness. As Mason points out, the revelation relies on a patient still having a decent amount of hair.

"Could you tap into the pathway with a cream or injection? That could well be possible -- or maybe don't wait until you're totally bald?"

The new study was published this week in the journal Cell.

Most people carry at least one recessive disease mutation

Health News // 16 hours ago
Updated COVID-19 boosters could save 90,000, if people get them
How many Americans will die of COVID-19 this winter could depend on how many get their booster shots, a new report shows.

Health News // 16 hours ago
Zoning out while awake is natural, like brain going offline, study says
Oct. 6 (UPI) -- New research suggests that staring into space while a person is awake is a natural phenomenon -- even if it is at times annoying.