"There was no association between using the vaccine and unsafe sexual practices," said Seth Seabury.

Getting the HPV vaccine did not encourage young women to change their sexual behavior, according to a new study. Photo courtesy Centers for Disease Control and Prevention

BOSTON, Feb. 9 (UPI) -- Doctors, researchers and public health officials have touted the importance and effectiveness of the HPV vaccine, which protects women against the human papillomavirus, an infection that is responsible for more than 70 percent of all cervical cancer cases.

Some critics suggest the vaccine may promote riskier sexual behavior in young girls, the target group for physicians and public health officials encouraging wider use of the vaccine. But a recent study shows that teens vaccinated against HPV are not likelier to engage in promiscuity or enable the spread of sexually transmitted infections (STI).

The study, carried out by researchers at Harvard Medical School and the University of Southern California, included the analysis of rates of STIs among two groups of study participants -- 21,000 girls who were vaccinated and 186,000 who were not. As each group aged, the numbers who contracted STIs increased at the same rate.

The vaccinated group started and ended with a higher percentage of STIs. But researchers say the young girls willing to be vaccinated were likelier to be more sexually active to begin with.

"If providing girls with the HPV vaccine caused an increase in risky sexual behavior, we would expect to have seen a steeper increase in STI rates in the quarters following administration of the vaccine," explained study co-author Seth Seabury, a researcher at USC's Keck School of Medicine. "We found no such increase, causing us to conclude that there was no association between using the vaccine and unsafe sexual practices."

The Centers for Disease Control and Prevention suggests boys and girls get the HPV vaccination at age 11 or 12. But recent reports suggest not enough parents and children are adhering to those guidelines. The latest report by the CDC showed just 57 percent of girls and 35 percent of boys between the ages of 13 and 17 had received at least one dose of the HPV vaccine. Most vaccine regimens require at least two doses to ensure protection against HPV.

The new study on HPV vaccines and STI rates was published this week in JAMA Internal Medicine. 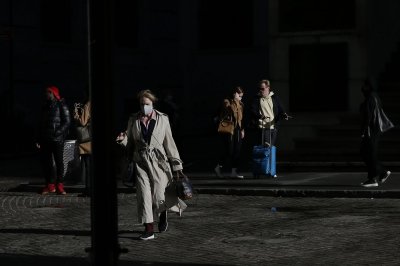