The report found 2.1 percent of abortions resulted in a complication, with 0.23 percent having a major complication like a blood transfusion or surgery that required hospitalization. 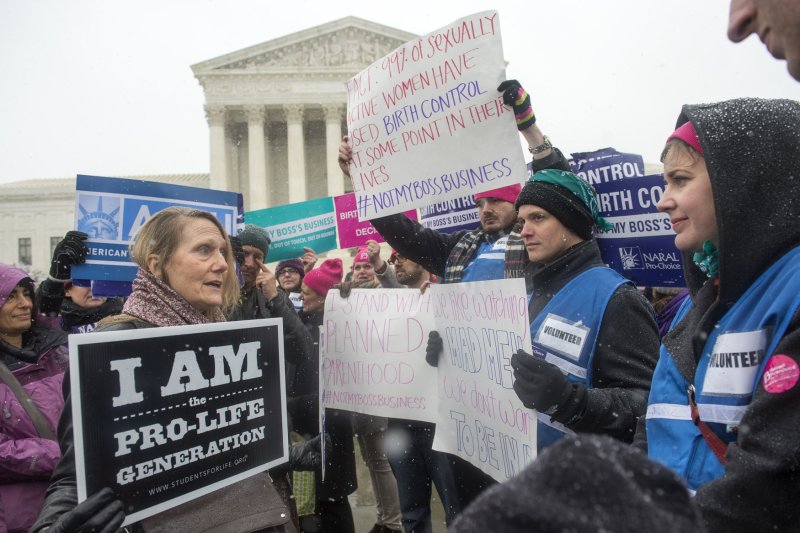 An anti-abortion supporter argues with supporters of women's rights groups as they participate in a rally in front of the Supreme Court in Washington, D.C. on March 25, 2014. A new study found complications from abortion are "rare." File photo by Kevin Dietsch. | License Photo

SAN FRANCISCO, Dec. 9 (UPI) -- The major complication rate of abortion procedures are "rare," less than that of a colonoscopy, researchers at a university in California say.

Scientists at the University of California San Francisco analyzed 54,911 abortions conducted from 2009-2010 as well as six weeks of followup services for each of the women.

The report, published Monday in Obstetrics & Gynecology journal, found that of those abortions, 2.1 percent overall resulted in a complication, with just 0.23 percent having a major complication like a blood transfusion or surgery that required hospitalization.

"Our study had very complete follow-up data on all of the women in it, and we still found a very low complication rate," said Ushma Upadhyay, PhD, MPH, an assistant professor at Advancing New Standards in Reproductive Health (ANSIRH), a program of the Department of Obstetrics, Gynecology and Reproductive Sciences at UCSF. "Abortion is very safe as currently performed, which calls into question the need for additional regulations that purportedly aim to improve safety."

Of the abortions included in the study, 97 percent were performed in outpatient clinics or in a doctor's office. Three percent took place in hospitals.

"Many state legislatures have recently passed laws that have the effect of reducing access to abortion by requiring providers to have transfer agreements or admitting privileges with hospitals or to construct their clinics so that they meet the requirements of an ambulatory surgical center," a news release from the university said. "But the researchers said that these restrictions were likely to make women travel further to get abortions or induce them on their own using unsafe methods, both of which may increase the risks for women."

The authors of the report said the complication rates were on par with previous, similar studies, but this report included more comprehensive, follow-up care women may have sought out after receiving an abortion.