Of the 621 cases of whooping cough in San Diego County this year, 85 percent were vaccinated.

SAN DIEGO, June 15 (UPI) -- Of the 621 people in San Diego County diagnosed with whooping cough this year, 85 percent were up to date with their pertussis immunizations, calling into question the effectiveness of the vaccine.

California is currently on track for having the most cases of the disease since 2010, and state officials declared the recent increase of cases an epidemic.

Of the 621 people who've had the disease in San Diego County this year, 527 had the six shots necessary to be up to date with their pertussis vaccine and 67 were not. Immunization status for 27 of the ill wasn't known.

"But then the protection decreases over time," she added.

Even with the decreased effectiveness of the vaccine, it still helped to lessen the severity of the disease.

The Centers for Disease Control and Prevention recommend children get the pertussis vaccine at 2 months, 4 months, 6 months 15 to 18 months, and 4 to 6 years.

Whooping cough usually starts with cold-like symptoms, including a mild cough and fever, the CDC says.

Severe coughing and coughing fits can continue for weeks after that, resulting in a loud whooping sound as the infected gasp for air.

In babies under 1 year of age, there may be a dangerous change in breathing pattern.

Before traveling to World Cup, Olympics, Paralympic Games in Brazil, see a doctor

Health News // 4 hours ago
COVID-19 may trigger heart condition in young athletes
A heart condition, myocarditis, has been found in a number of U.S. college athletes who have had COVID-19, a new study finds.

Health News // 6 hours ago
Study: More years playing football means more brain lesions on MRI
A new study suggests that brain scans can reliably spot signs of sports-inflicted neurological damage while a person is still alive, and the study showed that more lesions show up on scans the longer a person plays. 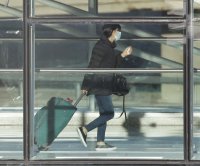