The discovery of an "anti-appetite" molecule, which tells the brain to stop eating, makes a medication to "switch off" hunger a possibility in the future.

Dietary fiber, found in most plants and vegetables, but tends to be at low levels in processed food and may be key to weight loss. UPI/Gary C. Caskey | License Photo

LONDON, April 30 (UPI) -- The discovery of an "anti-appetite" molecule, which tells the brain to stop eating, makes a medication to "switch off" hunger a possibility in the future.

Researchers at Imperial College London and the Medical Research Council led an international team that identified acetate as the anti-appetite molecule which is naturally released to the brain when fiber is digested.

The study, published in Nature Communications, found acetate reduced appetite when directly applied into the bloodstream, the colon or the brain.

Lead author Gary Frost of the Department of Medicine at Imperial College London said when fiber is digested by bacteria in the colon, it ferments and releases large amounts of acetate as a waste product.

Using positron emission tomography scans, the researchers traced the acetate throughout the body and showed that it ended up in the hypothalamus region of the brain, which controls hunger.

A form of dietary fiber -- inulin -- contained in chicory and sugar beets was given to mice fed on a high-fat diet.

In stone-age times we ate about 100 grams per day (of fiber) but now we favor low-fiber ready-made meals over vegetables, pulses (beans) and other sources of fiber. Unfortunately our digestive system has not yet evolved to deal with this modern diet and this mismatch contributes to the current obesity epidemic," Frost said. "Our research has shown that the release of acetate is central to how fiber suppresses our appetite and this could help scientists to tackle overeating.”

Health News // 4 hours ago
Study: More than half of people in U.S. plagued by back, leg pain
There's much Americans may disagree on, but many share one thing in common: chronic pain. 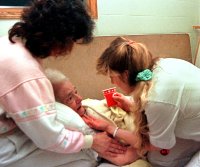 Health News // 20 hours ago
More than 1 in 10 COVID-19 patients report memory loss 8 months later
July 29 (UPI) -- More than one in 10 people with COVID-19 report memory and concentration problems up to eight months after infection, a study published Thursday by JAMA Network Open found.

Health News // 1 day ago
Dementia cases to nearly triple worldwide by 2050, study says
The global total of people living with dementia will rise nearly three-fold by 2050, researchers say, with cases expected to increase from 57.4 million in 2019 to about 152.8 million in 2050.

Health News // 1 day ago
Bogus information on cancer common online, study shows
A new study finds that one-third of the most popular articles on social media about treatment for common cancers contains misinformation -- and most of it can be downright dangerous.