Healthy postmenopausal women who drink two or more diet drinks a day may be more likely to have a heart attack, stroke or other cardiovascular problems.

"Our findings are in line with and extend data from previous studies showing an association between diet drinks and metabolic syndrome," lead investigator Dr. Ankur Vyas of University of Iowa Hospitals and Clinics said in a statement. "We were interested in this research because there was a relative lack of data about diet drinks and cardiovascular outcomes and mortality."

Consumption data were obtained via a questionnaire that asked the women to report their diet drink consumption habits over the previous three months. A drink was defined as the equivalent of a 12-ounce beverage and included both diet sodas and diet fruit drinks.

RELATED McDonald's website advises against eating a lot of fast-food

"We only found an association, so we can't say that diet drinks cause these problems," Vyas said. "It's too soon to tell people to change their behavior based on this study; however, based on these and other findings we have a responsibility to do more research to see what is going on and further define the relationship, if one truly exists."

The findings were presented at the American College of Cardiology's 63rd annual scientific session in Washington. 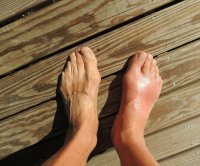 Health News // 11 hours ago
Menthol cigarette use highest among marginalized groups, report finds
WASHINGTON, Jan. 26 (UPI) -- LGB Americans among the top 10 populations disproportionately affected by tobacco use, according to a new report by the American Lung Association.

Health News // 14 hours ago
Robot performs laparoscopic surgery on pig tissue without human help
Jan. 26 (UPI) -- A robot has performed a small-incision, camera-guided surgical procedure on the soft tissue of a pig -- a milestone researchers involved in the trial described as a step closer to fully automated operations on humans.

Health News // 16 hours ago
Survey: Most adults with asthma wear masks despite discomfort
Although they report difficulty breathing and discomfort while wearing a face mask, most people with asthma still use them in public places during the COVID-19 pandemic, a new study finds.

Health News // 17 hours ago
Asian Americans approach sun protection differently from other groups, study finds
Jan. 26 (UPI) -- Asian Americans protect themselves from the sun's potentially harmful rays differently from those in other racial and ethnic groups, and research into skin cancer risk needs to take these distinctions into account.