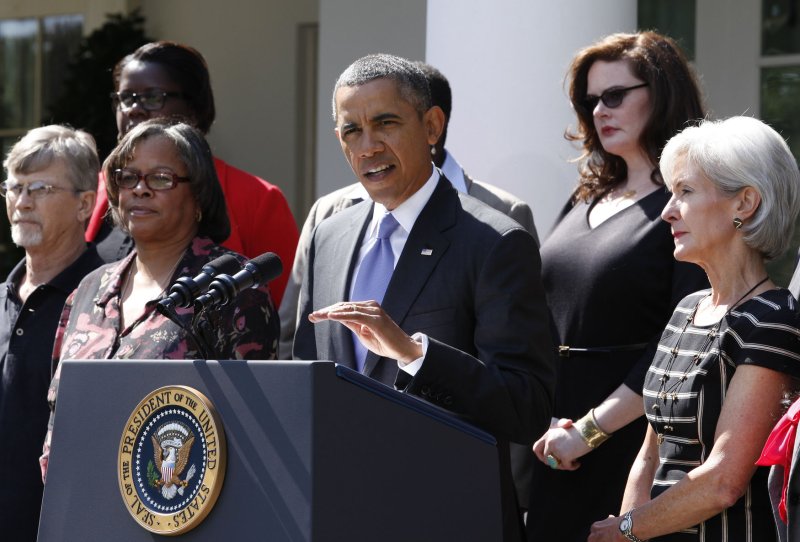 NY's Internet Marketplace got 10 million hits its first day. U.S. President Barack Obama delivers a statement in the Rose Garden in Washington after his meeting with Americans who will benefit from the opening of Health Insurance Marketplaces and being able to comparison shop for the health plans as a result of the Affordable Care Act on October 1, 2013. UPI/Yuri Gripas. | License Photo

The Affordable Care Act Internet marketplace -- also referred to as exchanges -- had a surge of cybershoppers Tuesday trying to log on, register, browse or purchase one of 54 health insurance plans offered on the federal website -- as well as on several state websites that offer insurance plans for uninsured residents.

Health officials had warned of "glitches" during the open enrollment of the Affordable Care Act, which began Tuesday, but the biggest problem was the millions trying to access the marketplace websites -- resulting in websites being crashed, frozen and clogged.

"Americans successfully enrolled through HealthCare.gov and state-based Marketplaces on day 1," U.S. Department of Health and Human Services spokesman Fabien Levy said in a statement. "Volume at HealthCare.gov continues to be high, in the first 24 hours, our call center receiving more than 190,000 calls and more than 104,000 web chats requested.

RELATED Poll: Two-thirds of uninsured to get health coverage by deadline

"We expect to see similar volume Tuesday, and while this overwhelming interest is continuing to cause wait times, there will be continuing improvements in the coming hours and days."

Federal officials have not disclosed how many people purchased health insurance plans Tuesday.

RELATED Survey: Many who could benefit from Obamacare' unaware

"Operators at the state's call center have assisted thousands of callers while our technicians have increased the site's capacity and are looking into the cause of this abnormally high traffic," Frescatore said.

New York officials had estimated about 1.1 million people would buy health insurance through the online marketplace by 2016.

Kentucky's marketplace, the Kynect, processed more than 1,000 applications for insurance by 9:30 a.m. Tuesday, and 24,000 visited the website to browse the insurance rates, The Washington Post reported.

"It is a higher volume than we expected and it has caused a few technical issues," Jill Midkiff, a spokeswoman in Kentucky's Cabinet for Health and Family Services, told the Post.

Exchange officials in Colorado, Oregon and Washington had an announced before Tuesday's first day of the online marketplace that some features of their websites wouldn't be ready, The Wall Street Journal reported.

For the past three years, Martinez, 41, said she paid to see her doctors, and bought her prescriptions from Canada, but she said she feared health problems she couldn't anticipate such as accidents, or another serious illness.

Because of her illness, Martinez's income was limited to $30,000 last year. She was eligible for several plans and she chose a silver plan with a premium of about a $100 dollars a month, and a $500 deductible.

RELATED U.S. seniors on Medicare do not need to apply for 'Obamacare'