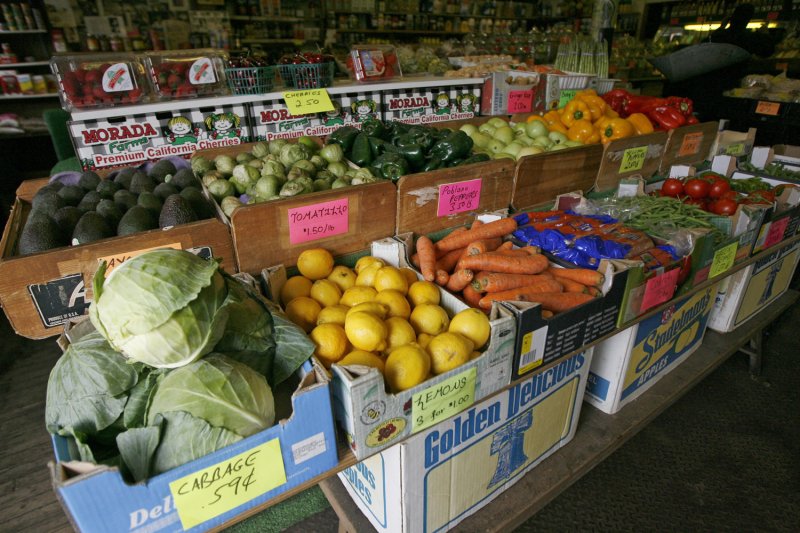 Okinawans have a low risk of arteriosclerosis, cancer, diet may be why. (UPI Photo/Brian Kersey) | License Photo

NAHA, Japan, June 20 (UPI) -- The odds of living to 100 are highest in Japan, and their high-vegetable low-meat diet may be why, some of the elderly say.

The Japanese Okinawa islands are said to include the largest proportion of centenarians in Japan, who eat a diet such as rice and tofu, bamboo shoots, seaweed, pickles and small cubes of braised pork belly, The Guardian reported. Many in Japan drink six or more cups of green tea every day.

Dr. Craig Willcox, who researches Okinawan longevity and co-wrote the book, "The Okinawa Program," said to duplicate the diet of those in Okinawa "eat as low down the food chain as possible."

"The Okinawans have a low risk of arteriosclerosis and stomach cancer, a very low risk of hormone-dependent cancers, such as breast and prostate cancer," Willcox told The Guardian. "They eat three servings of fish a week, on average, plenty of whole grains, vegetables and soy products too, more tofu and more konbu seaweed than anyone else in the world, as well as squid and octopus, which are rich in taurine -- that could lower cholesterol and blood pressure."

Okinawa's indigenous vegetables include: purple sweet potatoes rich in flavonoids, carotenoids, vitamin E and lycopene; and the local bitter cucumbers, or "goya," have been shown to lower blood sugar in those with diabetes.

Turmeric and jasmine tea, which both potentially ward off cancer, are also prominent in the diet among those in Okinawa.

Professor John Mather, director of the Institute for Ageing and Health at Newcastle University in England, said the Okinawa diet wouldn't do any harm, but the prevailing scientific evidence weighs more heavily in favor of the Mediterranean diet.

"One hypothesis is that the secret about aging is to avoid accumulating molecular damage, and eating fish, beans, nuts, seeds, legumes, whole grains, and not so much red meat, dairy or sugar may help us to reduce that kind of cellular damage," Mather told The Guardian.

Cancer diagnoses drop as many skip screening due to COVID-19