Study leader Jane E. Cavanaugh of Duquesne University in Pittsburgh said falls become more common with advancing age and are the leading cause of injury-related death among those age 65 and older.

The researchers periodically tested the rodents' ability to navigate a steel mesh balance beam, counting the number of times that each mouse took a misstep. Initially, the older mice had more difficulty maneuvering on the obstacle.

By week four, the older mice made far fewer missteps and were on par with the young mice.

"Our study suggests that a natural compound like resveratrol, which can be obtained either through dietary supplementation or diet itself, could actually decrease some of the motor deficiencies that are seen in our aging population," Cavanaugh said in a statement. "And that would, therefore, increase an aging person's quality of life and decrease their risk of hospitalization due to slips and falls."

The study was presented to about 14,000 scientists and others gathered at the 244th National Meeting & Exposition of the American Chemical Society in Philadelphia.

Health News // 12 hours ago
Drinking rose during pandemic, especially for women, Black people
It may seem harmless to while away hours stuck at home during the pandemic with extra wine and cocktails. But new research instead points to a troubling trend: Alcohol use and risky drinking rose in the U.S. last year. 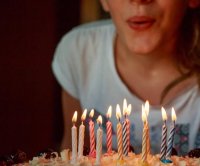