PITTSBURGH, Nov. 25 (UPI) -- Exposure to influenza H1N1 was influenced by social determinants such as the lack of paid sick leave, U.S researchers found.

Supriya Kumar of the University of Pittsburgh and colleagues assessed the impact of social determinants of potential exposure to H1N1 -- unequally distributed by race and ethnicity in the United States -- on incidence of influenza-like illness during the 2009 H1N1 pandemic, by surveying a nationally representative sample of 2,079 U.S. adults in January 2010.

The researchers found a higher incidence of influenza-like illness related to workplace policies such as access to paid sick leave, and structural factors such as number of children and crowding in the household.

However, even after controlling for income and education, the Hispanic population was related to a greater risk of influenza-like illness attributable to social determinants.

"Federal mandates for sick leave could have significant health impacts by reducing morbidity from -- influenza-like illness -- especially in Hispanics," the study authors said in a statement.

The study was published online ahead of the January print issue of the American Journal of Public Health.

Health News // 24 minutes ago
Lung diseases increased 18% worldwide in last 30 years
Lung diseases have been striking more people around the world in the past 30 years, new research shows. And being from poor regions is the most important risk factor for respiratory trouble, scientists added. 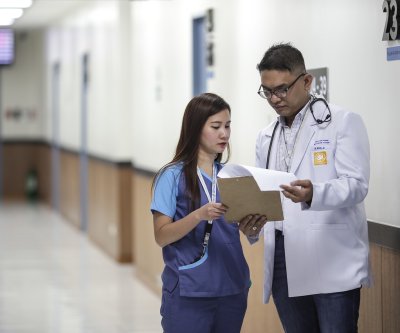 Health News // 2 hours ago
Age may affect healthcare treatment decisions
There may be something about a patient's age of 80 that makes doctors alter their heart attack treatment decisions -- consciously or not, new research suggests.

Health News // 20 hours ago
First baby born from use of lab-matured frozen egg
In what doctors call a breakthrough, a cancer patient in France gave birth to the first baby conceived from an immature egg that was matured in the laboratory, frozen, then later thawed and fertilized.

Health News // 22 hours ago
Mediterranean diet good for microbiome
The so-called Mediterranean diet is already considered one of the healthiest for your heart, and now scientists say it may give your gut bacteria a boost, too.

Health News // 23 hours ago
Medicaid expansion led to earlier breast, colon, lung cancer diagnosis
Feb. 19 (UPI) -- In the latest study assessing the impact of the changes in eligibility allowed under Obamacare, those residing in states that opted to expand Medicaid were shown to be diagnosed with cancer earlier.

Health News // 23 hours ago
Egypt, Algeria, South Africa at 'high risk' for coronavirus, analysis finds
Feb. 19 (UPI) -- Egypt, Algeria and South Africa are among the highest-risk countries in Africa as the COVID-19 outbreak threatens to expand to the continent, but other nations with less-prepared health systems may be more vulnerable.

Health News // 1 day ago
Chemicals in cosmetics, other products linked to autism traits in boys
Feb. 19 (UPI) -- In utero exposure to the chemical phthalate has been linked with autistic traits in young boys, according to an analysis published Wednesday in the journal Environmental Health Perspectives.