EDINBURGH, Scotland, April 6 (UPI) -- University of Edinburgh researchers say high levels of the stress hormone cortisol in aging mice made them less able to remember how to navigate a maze.

Dr. Joyce Yau of the University of Edinburgh's Centre of Cardiovascular Science and colleagues showed how two receptors in older brains react to the stress hormone cortisol.

The researchers found one receptor was activated by low levels of cortisol, which helped memory, but once

levels of this stress hormone were too high they spilled over onto a second receptor -- contributing to memory impairment.

The researchers are investigating a new chemical compound which blocks an enzyme -- 11beta-HSD1 -- that is involved in producing stress hormones within cells. The compound could be used to develop a drug treatment to slow the normal decline in memory associated with aging or even improve memory in the very old, Yau says.

Health News // 4 hours ago
Technology preserves bonds in addiction treatment during COVID-19 crisis
Everyone is struggling with isolation as much of the world hunkers down to slow the spread of COVID-19, but this time poses even greater hazards for folks recovering from addiction, experts say.

Health News // 6 hours ago
Some steroid medications may raise coronavirus risk
People taking a certain class of steroids for inflammatory conditions such as asthma, allergies and arthritis may be at increased risk from the new coronavirus, experts say.

Health News // 14 hours ago
New drug shows promise for pneumonia caused by COVID-19, study finds
April 6 (UPI) -- Researchers have identified a new drug that reduced the lung damage associated with COVID-19 in human lung cultures and mice, but it still needs to be tested for safety and efficacy in humans.

Health News // 15 hours ago
Spread, mitigation of COVID-19 could be tracked in municipal wastewater
April 6 (UPI) -- Researchers at the University of Arizona say they may be able to track the presence of coronavirus in communities by analyzing municipal wastewater.

Health News // 16 hours ago
Trials begin for potential COVID-19 drug remdesivir
A drug originally developed to treat Ebola is getting a second chance in the spotlight, as research teams in the United States, Asia and Europe race to test it against the new coronavirus. 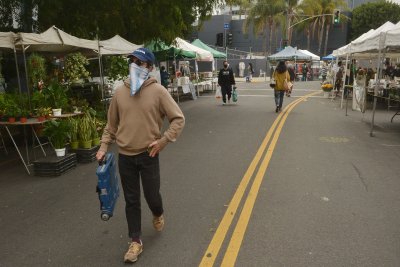