Coffee may reduce the risk of stroke

STOCKHOLM, Sweden, March 11 (UPI) -- A study involving almost 35,000 women found those who drank little or no coffee had an increased risk of stroke, researchers in Sweden found.

Lead researcher Susanna Larsson of the National Institute of Environmental Medicine at the Karolinska Institute in Stockholm said coffee consumption has been inconsistently associated with stroke incidence and mortality in previous studies.

The research team investigated the association between coffee consumption and stroke incidence in the Swedish Mammography Cohort, with women who did not have a history of cardiovascular disease or cancer at baseline in 1997.

After a mean follow-up of 10.4 years, the researchers determined there were 1,680 stroke events. The association between coffee and cerebral infarction (stroke) was not modified by smoking, body mass index, history of diabetes, hypertension or alcohol consumption, the researchers said.

The study, published in the journal Stroke, found drinking one to five cups of coffee a day was associated with a 22 percent to 25 percent lower risk of stroke among women -- compared with those who drink no coffee or less than one cup a day.

Health News // 5 hours ago
Stem cell treatment may prevent amputations in diabetes
One of the most dangerous complications of diabetes is a foot ulcer that won't heal, but now a preliminary study finds that a type of stem cell found in body fat may be a powerful remedy for these severe foot wounds.

Health News // 7 hours ago
Woman's DDT exposure may affect granddaughter's health, study says
A long-banned pesticide may be having health effects that ripple across generations, a new study suggests. 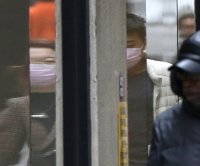 Health News // 15 hours ago
Study: States with high mask-wearing saw lower COVID-19 infection rates in 2020
April 14 (UPI) -- States that required residents to wear masks in public spaces during the height of the COVID-19 pandemic last year saw lower infection rates than those without mandates, a PLOS ONE study found.

Health News // 21 hours ago
Study links childhood eczema with learning disabilities
April 14 (UPI) -- Children with eczema are up to three times as likely to be diagnosed with a learning disability compared to those without the condition, a study published Wednesday by JAMA Dermatology found.