WASHINGTON, July 14 (UPI) -- Review documents released by the U.S. Food and Drug Administration indicate the obesity drug Qnexa may be approved, but there are side-effect concerns.

The federal agency acknowledges the drug has met standards for approval, including a reduction in body weight of 5 percent or greater compared with a placebo -- but the FDA has articulated concerns about the cardiovascular, psychiatric and cognitive side effects, Medpage Today and ABC News reported.

However, if the drug by the drug maker Vivus is approved, it will be limited to obese patients who have a body mass index of 30 or more, or overweight patients with a BMI of 27 or higher if they also have high blood pressure, diabetes, dyslipidemia or belly fat.

Included in the review are two randomized, double-blind, placebo-controlled 56-week trials conducted by Vivus and presented at medical meetings, but not yet published in peer-reviewed journals.

Overall side effect rates were low, but about four to seven times as many patients in the Qnexa studies discontinued the drug due to anxiety, sleep and depression-related adverse events.

In addition, patients reported cognitive-related adverse effects on attention, memory and language, and more reported increases in heart rate relative to those in the placebo group.

Health News // 4 hours ago
Study: 87% of excess lung cancer risk eliminated if smokers quit before age 45
Smokers who kick the habit before age 45 can nearly eliminate their excess risk of dying from lung or other cancers, a new study estimates.

Health News // 8 hours ago
Study: COVID-19 vaccination does not raise odds for miscarriage
COVID-19 vaccines don't increase the risk of miscarriage in early pregnancy, according to a study that adds to previous research showing the vaccines are safe for pregnant women. 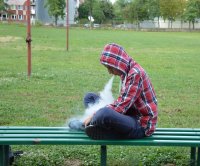 Health News // 9 hours ago
Study: More than 1 in 7 teens, adolescents in U.S., Canada have vaped pot
Oct. 25 (UPI) -- More than one in seven adolescents and teens in the United States and Canada has vaped marijuana in their lifetimes, an analysis published Monday by JAMA Pediatrics.

Health News // 11 hours ago
Pumpkin carving is top cause of Halloween injuries
Your Jack-o'-Lantern may be more than scary -- it could be dangerous. Pumpkin carving is the leading cause of injuries associated with Halloween, according to the U.S. Consumer Product Safety Commission.