Firdaus Dhabhar, associate professor of psychiatry and behavioral sciences at Stanford University's School of Medicine, says the finding is surprising because chronic stress has the opposite effect -- taxing the immune system and increasing susceptibility to disease.

"This is the first evidence that this type of short-lived stress -- public speaking or a job interview -- may enhance anti-tumor activity," Dhabhar said in a statement.

The researchers investigated the effect of short-term, or acute, stress on 30 laboratory mice exposed for 10 weeks to thrice-weekly doses of cancer-causing ultraviolet light.

The light was non-blistering and non-burning and the mice experienced only a slight reddening of the skin after each exposure. But the light was composed mainly of the most dangerous wavelength -- called UV-B. Starting at week 11, many of the mice went on to develop precancerous and cancerous growths similar to those in humans.

The mice were then stressed by restricting their movements.

The study found fewer of the mice that had been acutely stressed developed skin cancer during weeks 11-21.

The findings are scheduled to be published in the journal Brain, Behavior and Immunity.

Health News // 3 hours ago
Study finds vaping common among people diagnosed with eating disorders
College students who vape appear to be at higher risk of having an eating disorder, a new study suggests.

Health News // 5 hours ago
Study: Blood cancer patients may benefit from COVID-19 vaccine booster
Patients with B-cell blood cancers who did not make antibodies to COVID-19 after two shots of vaccine may find that a third shot does the trick, new research finds.

Health News // 16 hours ago
Study: Couples in supportive marriages have better mental, physical health
Sept. 15 (UPI) -- Couples who support one another during stressful times show signs of improved mental and physical health compared to those in less nurturing relationships, a study published Wednesday by PLOS ONE found.

Health News // 16 hours ago
Experts: Vaccinating people for the first time should be priority over booster shots
Sept. 15 (UPI) -- President Biden's COVID-19 vaccine mandates for federal staff and certain private-sector employees should help get people vaccinated in the first place, and this effort is more important than booster shots, experts said.

Health News // 19 hours ago
Many NYC women delayed planned pregnancies during pandemic, study finds
Sept. 15 (UPI) -- Nearly half of New York City women who were planning to have children before the COVID-19 pandemic decided to wait during the first few months of the outbreak, a study published Wednesday by JAMA Network Open found.

Health News // 20 hours ago
Multigenerational study finds links between ADHD, dementia risk
Parents and grandparents of people with ADHD have a higher risk of Alzheimer's and dementia than people with no ADHD in their family, Swedish researchers said. 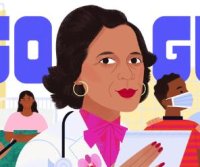 Health News // 1 day ago
Plant-rich diet may lower odds for severe COVID-19, study suggests
People who eat plenty of fruits and vegetables may have a somewhat lower risk of COVID-19 than those with unhealthy diets, a new study suggests.