WASHINGTON, Nov. 28 (UPI) -- The U.S. Food and Drug Administration, although still wary from Vioxx and other drug-safety controversies, appears to be picking up its pace for approving new drugs, a trend that should bode well for the pharmaceutical industry next year, according to an analyst report.

"The pharmaceutical industry must really enjoy the change in seasons because October proved to be the most robust month of the year, with 15 new drug application (NDA) approvals and five new molecular entity (NMEs) approvals," James Kumpel, an analyst with Friedman, Billings & Ramsey, stated in a report issued Tuesday.

"Following a strong September, October approvals levels brought year-to-date NDA approvals to 83, in line with 2004 results, which marked the best year of FDA approvals during the Bush administration," Kumpel noted.

If this trend continues into next year, this would be good news for the pharmaceutical and biotech industries.

However, the Democrats, who recently won majority control of Congress, are expected to bring in tighter regulations at the FDA in 2007. This could slow the rate of NDA approvals.

"Should the agency return to its cautious approach of 2001-2002, when there was no FDA commissioner, the result could have a chilling effect on the pace of approvals," Kumpel stated.

IMS Health recently projected a 5 percent to 6 percent growth in the global pharmaceutical market for 2007 but anticipated the number of new product launches would be about the same as for 2006.

However, the total number of blockbusters is expected to rise from 94 in 2005 to 112 in 2007, IMS Health estimated. Potential blockbusters that are expected be launched in 2007 include Johnson & Johnson's paliperidone for schizophrenia, Wyeth's desvenlafaxine for depression and Novartis' Galvus for diabetes.

Eric Coldwell, an analyst with R.W. Baird, told UPI the political climate will be a boon for healthcare IT and disease-management firms and companies that support big pharma and biotech, such as contract research organizations, or CROs.

"I've been a believer that the sectors that would potentially benefit from the change in political course, i.e. stricter, more rigorous regulatory environment, would be health IT, CROs, and disease management," Coldwell said.

"If I'm a bloated, large pharma company, I've got real challenges long term that I will have to find solutions for, and that means relying more on business-to-business service industries," he said.

"The companies behind the scenes are the ones that I think are the most exciting. They're the solutions to the problems facing healthcare, big pharma and biotech," he added.

An additional factor that should prove to be a positive for these firms is that pharmaceutical companies probably will not reduced research-and-development spending. "They're just going to slow down doing it in-house, so the more challenges facing big pharma and biotech means more opportunities for companies that help them," Coldwell said.

In terms of health IT and disease management, these firms stand to prosper in the short term as well as over the long haul. "The outlook in that field is really the best it's ever been," Coldwell said.

This is because in addition to the political support for improving patient care and reducing medical errors, there are also economic incentives, such as avoiding liability and reducing healthcare costs, that will drive investment in this area.

The healthcare IT beneficiaries include GE, Siemens, Philips and a host of smaller firms, such as Eclipsys, Coldwell said.

In the disease-management area, McKesson stands to benefit. Other firms that will do well include manufacturers of IV administration pumps, such as Baxter, Cardinal and Abbott, and companies involved in providing better drug tracking, bar coding and automation, such as Omnicell, he said. 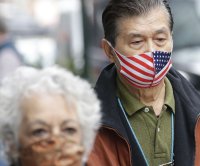 Health News // 13 hours ago
Study: No sign COVID-19 raises odds for preterm delivery, stillbirth
In a sign that the pandemic may have spared pregnant women and their newborns, a new Canadian study suggests there was no increase in preterm births or stillbirths during the first year of the pandemic.

Health News // 13 hours ago
Cancer surgery at leading hospitals up to 30% more expensive, study finds
Aug. 3 (UPI) -- Choosing a leading research institution for cancer care comes with a cost, according to a study published Tuesday by JAMA Network Open. 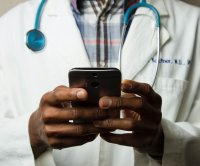 Health News // 15 hours ago
Fewer doctors wearing white coat, but many in U.S. expect it
Your doctor walks into the exam room wearing a white coat. Or perhaps your physician has on a fleece or softshell jacket. Does it make a difference? Yes, according to a new survey.

Health News // 1 day ago
Clinical trials for cancer drugs not halted by COVID-19 pandemic
The pandemic widely disrupted medical care across the United States, but a new study reports that clinical trials testing cancer treatments were able to carry on. 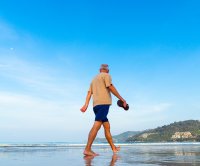