The Age of Autism: Concerned in Tennessee

Susan Lynn would like some information, please: What is the autism rate among people living in the United States right now who have never been vaccinated? If you have that data or know where to find it, kindly contact her by the end of the month, care of the Tennessee House of Representatives, which is considering whether to ban a mercury preservative from childhood vaccines.

Lynn, a Republican member of the House, is sponsoring the bill. Lynn's colleagues in the state Senate already have passed it -- unanimously -- despite protests from the American Academy of Pediatrics and St. Jude Children's Research Hospital in Memphis. The pediatricians and the renowned hospital say the mercury preservative, called thimerosal, is not dangerous and not linked to autism or any other ailment.

What bothers Lynn is they can't tell her the autism rate in Americans who've never been vaccinated.

"It would certainly be wonderful if the federal government, or a group out there interested in this, would conduct a study, or maybe there already is information out there that can be gathered."

Lynn's question echoes one this column has been raising for several months -- where are the studies that would exonerate thimerosal by demonstrating that unvaccinated Americans have just as much autism as those who received the full slate of state-mandated, mercury-containing childhood immunizations?

"You have to ask yourself why are there no studies," Lynn said. "We have seen an explosion in autism. If we saw increases in any other disease like we've seen in autism, it would be a national crisis. Why is there no funding to investigate this?

"I think it would be very useful. I don't know if I'll be able to get that data by December when our study committee meets again. But gosh, if you could be any help. ... "

This column's admittedly anecdotal reporting has turned up what looks like a lower prevalence of autism among the mostly unvaccinated Amish in Pennsylvania, Ohio and Indiana. Federal health experts say that is not a good group to study because they might be protected from autism by their isolated gene pool.

They have not suggested an alternative.

There are other, less genetically similar groups that don't vaccinate based on their religious, philosophical or health views. An example: a significant subset of the 2 million children of families who homeschool. One doctor who treats such families says they have almost no autism, either.

A number of readers have offered similar observations about a number of other groups. But none of it is scientific or conclusive and, unless such studies are done, it never will be.

"We'd definitely want to look at a population within the United States of America because that's most relevant to us," Lynn said. "When you start looking at populations from other countries, you've got all kinds of other factors that we can't imagine."

Lynn said that absent such convincing information, she is willing to err on the side of caution and ban thimerosal from childhood vaccines.

"I read the science and read the experience of these parents and I realized, you know what, there really could be something here. And thimerosal is a poison. There is a skull and crossbones on that bottle. There's no reason to have that in there -- so let's take it out."

Lynn's interest in the issue stems from personal experience. Her son, Michael, was diagnosed with ADHD -- attention deficit hyperactivity disorder -- at age 3; their doctor said they would have to wait till he was 6 to put him on Ritalin.

"I said why wait? I'm going crazy," she recounted. Researching the subject on her own, she came across the controversial Feingold Diet that eliminates various foods including those with artificial colors, flavors or preservatives. "I put him on the diet 100 percent and in three days, to my own astonishment, I had a normal little boy.

"I was at my doctor when I showed him Michael could now sit still on the examining table instead of being under it and in all the drawers and everything. And I was totally dismissed. So we just agreed to disagree.

Michael spent 10 years on the diet and now, at 21, is doing fine, Lynn said. When the controversy over a possible thimerosal-autism link arose, she learned that some scientists suspect ADHD and autism might be on opposite ends of a spectrum of neurodevelopmental disorders triggered by a toxic exposure. And she said she saw the same pattern of parents being ignored when they said their child had regressed after vaccination -- and in some cases improved dramatically after biomedical treatment.

In 1999 the U.S. Public Health Service and the pediatricians group urged that manufacturers phase out thimerosal in childhood vaccines as soon as possible. But they say scientific evidence now shows thimerosal is not responsible for autism; therefore, banning it ties their hands unnecessarily and injects politics in a medical decision based on "junk science."

Lynn says she can't understand that argument. "I think it would be the best public policy for the state of Tennessee to remove it from children's immunizations. Whether or not it does contribute to mercury toxicity or autism or whatever you want to call it, not giving tiny children and newborn babies a chemical that has a skull and crossbones on the bottle, injected directly into their bloodstream, can't be a bad thing."

Lynn also questions whether thimerosal is actually out of all routine childhood immunizations (it remains in most flu vaccines, which the Centers for Disease Control and Prevention now recommends for pregnant women and for infants 6 to 23 months old).

She said a Tennessee mother testified at a legislative hearing that her son received an immunization that contained thimerosal on May, 21, 2004. "He suffered immediate effects from that and was diagnosed with autism and he's being treated now and he is coming around," Lynn said.

Six states -- including California, New York and Illinois -- have banned thimerosal in childhood vaccines. Lynn said she is now canvassing them to determine whether the ban has caused problems.

Health News // 7 hours ago
Study: Intervening in infancy may prevent some cases of autism
Infants may show early signs of autism, but a diagnosis usually isn't made until age 3. Now, a new study suggests that jumpstarting therapy might stave off that diagnosis altogether. 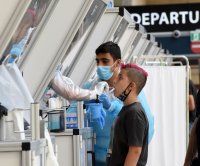 Health News // 16 hours ago
Consuming dairy fat may not increase heart disease risk, study finds
Sept. 21 (UPI) -- People with diets high in dairy fat are at lower risk for heart disease than those who consume less fat from milk-based foods, a study published Tuesday by the journal PLOS Medicine found.

Health News // 1 day ago
Study: Exercise benefits heart, but could increase calcium deposits in arteries
Sept. 20 (UPI) -- Physical activity, though generally beneficial for the heart, may in some cases increase a person's risk for heart disease, a study published Monday by the journal Heart found.
Advertisement