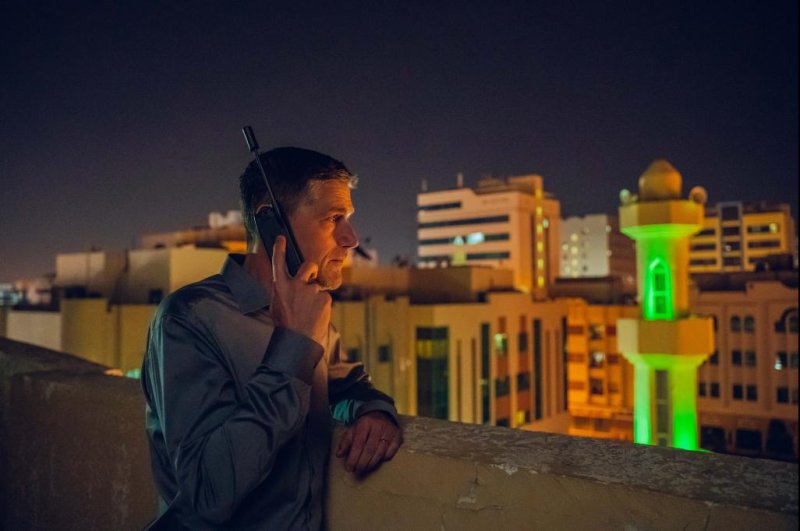 NEW YORK, Sept. 8 (UPI) -- Lost alumnus Matthew Fox and Downton Abbey actress Joanne Froggatt say they wanted to star in the new Peacock thriller, Last Light, because it places a relatable family at the center of a cautionary tale about energy dependency.

All five episodes of the series will be available Thursday.

Based on Alex Scarrow's best-selling novel of the same name and helmed by Party of Five director Dennie Gordon, the drama casts Fox as Andy Yeats, a petrochemist called to the Middle East to figure out why an enormous supply of oil and gas has been corrupted.

Soon after he arrives, most modes of power -- electricity, oil and gas -- start to fail around the world, plunging cities into darkness and chaos.

Froggatt plays Andy's wife, Elena, who is in Paris to see a surgeon for their blind, 8-year-old son, Sam (Taylor Fay), while their teen eco-warrior daughter, Laura (Alyth Ross), is at their home in London.

Amber Rose Revah plays Mika, a British government agent who alternates between protecting Andy and suspecting he knows more about the global energy problems than he is letting on to.

"I never know why I respond to things. This one, I think it was the timeliness of it and the backdrop of the oil crisis and where we are in the world right now," Fox told UPI in a recent Zoom interview.

The Yeats may have their issues, he admitted, but they are a very loving and connected family.

"To have them separated amid this crisis is such a beautiful thing and such a warning for what is happening in the world right now and how it's already having its effects and separating families and creating a lot of refugee situations," Fox said.

The actor also said he was lured out of semi-retirement because Last Light offered him an executive producer role behind the scenes.

"I had the opportunity to put my hand on more storytelling elements than just the character that I was telling and portraying," Fox said.

"It was an amazing experience across the board. I can't say enough about the cast and the crew and how hard everyone worked on it. It was a pretty ambitious project given the amount of time and budget that we had to make this story," he added.

"The kind of commitment and passion and energy that was put in it was extraordinary and I'm very, very proud of it."

Froggatt said she was attracted to the show's non-stop action, likening it to a James Bond film.

"I felt our story has all of those things and, as Matthew said, the family trying to literally and metaphorically find each other again is the important part of all of this. It's a take on humanity and love and also the bigger question and crisis of what's happening to the world and what we are doing to our world, as well."

Although civilization is depicted in the series as breaking down fairly quickly, it also shows Andy and his team of scientists working tirelessly to get the lights back and strangers helping Elena and Sam to find food, medicine and a way home.

Fox said his character Andy doesn't always get things right -- as a father or a scientist -- but his intentions are good.

"At Andy's core, he is a good man, but he's lost his way a bit," the actor said. "It's easy for people, over time, to compromise their values and begin to focus on the monetary rewards of working for the oil company as Andy does at the beginning of the story and has been very committed to for some time.

"It's very easy to rationalize that need, especially with what he has with his son," Fox said.

The crisis reminds him that his family is what matters most to him.

"The story is very much about him being stripped down to the core of who he is, and his heart is definitely in the right place," Fox said.

Froggatt shares most of her scenes with the adorable 8-year-old actor who plays her son. It was his first major acting role.

"It was pretty fantastic," the actress recalled. "Taylor is phenomenal, and it could have been incredibly difficult. He is super-bright, super-intelligent. He had a lot of challenges in the role, but he had us in fits of giggles all the time.

"He is such a little character. He was just an absolute pleasure to be around and he loved being on set."

Gordon told UPI in a separate interview that Last Light was a story close to her heart.

"I never had the opportunity to do something that spoke so deeply to me, these issues that I care so much about - our dependence on oil, climate change, deforestation," Gordon said.

"I get to tell it against the backdrop of this incredibly heartbreaking family story with people we really care about," she said. "It was really checking all the boxes. It had action, it had incredible international scope, it had the opportunity for great diversity in the cast and it had such an important message. It spoke to me on all fronts."

"It was so important that we were able to see it through the prism of many people," she said.

"Isn't that the way it is? There is always going to be this perspective and that perspective. I think it's always so much more interesting to tell a story from all those different points of view. This is a global story."

Stephan James: Key to 'Surface' success was not giving too much away 'Pantheon' star Daniel Dae Kim: There are always ramifications to tech advances Amber Midthunder calls her 'Reservation Dogs' character 'absurd and amazing' Craig Johnson: Longmire loses memory, not moral compass, in 'Hell and Back'

TV // 14 hours ago
NBC orders more 'Lopez vs. Lopez'
Dec. 3 (UPI) -- NBC has announced it picked up an additional nine episodes of its freshman sitcom, "Lopez vs Lopez."