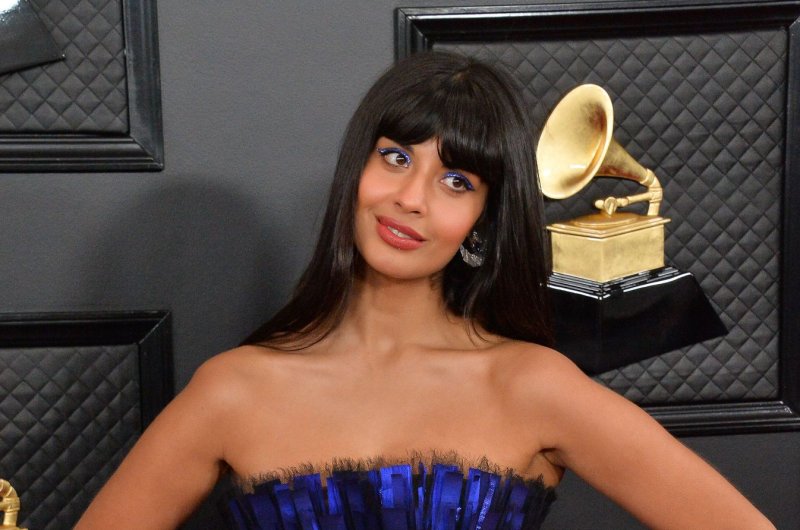 NEW YORK, Aug. 16 (UPI) -- The Good Place, The Misery Index and DC League of Super-Pets star Jameela Jamil says she was surprised by how physically challenging and empowering her She-Hulk: Attorney at Law character would become.

"I thought I would hate it! I previously said publicly, many, many times, that I would never do action, and I didn't actually know this was an action role when I signed up for it," the 36-year-old British-born, Indian and Pakistani actress told UPI in a recent Zoom interview.

"So, when they told me, I thought it would be a disaster."

Jamil -- who has hearing loss and hypermobile Ehlers-Danlos syndrome, a genetic disorder that affects her connective tissue -- said Marvel did everything it could to make a positive experience out of the grueling martial-arts training she endured to play the villain Titania.

"They were just amazing," Jamil said of the movie studio.

"They should be the example for all of the other companies in the world," she added. "When they found out I had this disability, they worked around me, they worked with me.

"They brought out the best in me. I was able to do 90% of my own stunts because of their training and because of their support system. They made a real fighter out of me. It was so empowering."

She recommended that all women try martial arts because it "completely changes the way that you feel."

"I'm almost, like, too brave," she said, recalling how she once ran toward a scary noise in her house because she could handle whatever it was, and then realized "I need to calm down."

Premiering Thursday on Disney+, She-Hulk is a half-hour comedy that follows Jennifer Walters (Tatiana Maslany) as she navigates the life of a single, 30-something attorney with the ability to transform into a green, 6-foot-7 superpowered hulk. Titania is a social-media monster with whom she crosses paths.

"Jessica Gao wrote the script of the century. It's honestly one of the best scripts I've ever read," Jamil said. "And having an Asian woman at the helm of a show like this feels like everything is happening in such an exciting and exhilarating way."

The actress also applauded Marvel for its inclusion of many different faces and social issues in its projects.

"We've never, ever, ever had a media giant like this, and it's really important when media giants and corporations take stands for things like diversity," she said. "This makes a statement to the greater public that this is important.

Jamil also had high praise for her co-stars, including Maslany and Ruffalo.

"I had the best time. It was an extraordinary crew and cast and we became incredibly close friends. I will never forget that experience as long as I live. I am so glad they tricked me into doing an action role."

Jamil chooses a project based on if she feels like it is moving a bigger societal conversation forward or doing something that someone like her doesn't typically get to do.

"So, I can crack a window for the next person who looks like me," Jamil said.

"With South Asian people, we were never deemed the love interest or the one who was admired for the way that they looked or even the villain. I really loved Tahani [in The Good Place] for that reason," she said.

"I was playing all of these facets that had nothing to do with me being South Asian, but I was a South Asian woman getting to do these things that we hadn't been doing before."

Titania, on the other hand, is a character "with an invisible disability, as well as being a South Asian woman in the Marvel Universe," she said.

Jamil, who also is a popular voice actress for animated series like DuckTales and Camp Cretaceous, said she loves trying new things so she can broaden her skills as an actress.

"Any time I have the opportunity to try something that scares me or I am nervous I won't be able to do, it is my duty to try it and to be vulnerable and to prove something to myself," she said.

During a time of what seems to be peak negativity, particularly online, Jamil finds happiness in using her celebrity to promote causes in which she believes.

"It's a necessity, otherwise, I am complicit. My industry is so guilty of putting so much toxicity out into the world," the actress said.

She noted that the main reason she went into show business was to fix the things she felt were broken.

"I grew up as a very sick kid, and I never had role models that had disabilities or health issues that weren't just the tragedy in a sob story, played by non-disabled actors. That's what I thought my story was," she said.

"That's all I thought I would be to the world -- an inconvenience and a tragedy. Twenty years later, we still don't really have many role models for young people."

As an artist who has achieved a successful career despite her physical challenges, she also is a tireless advocate for disability rights, and recently participated in the podcast, Equal Too: Achieving Disability Equality.

"We have really stigmatized the conversation around disability and made it so awkward and uncomfortable that we don't even bother learning about it because it feels too intimidating and we don't know where to start," Jamil said.

"This podcast creates this really fun, funny, accessible, warm, interesting, inspiring starting point for anyone who wants to learn about the lives of people with disabilities or anyone with a disability who would like to finally be seen or heard."

Jamil described the coronavirus pandemic, which began in early 2020, as a "huge wake-up call."

"People have realized that illness, disability, lack of access, lack of freedom can come to anyone at any time," Jamil said. "For tens of millions of people with disabilities, this has been their existence forever."

TV // 2 hours ago
'Mayfair Witches' teaser introduces Alexandra Daddario as Rowan
Oct. 3 (UPI) -- "Mayfair Witches," a new series based on the Anne Rice novels, is coming to AMC in early 2023.