Abbi Jacobson based 'League of Their Own' on history, not movie 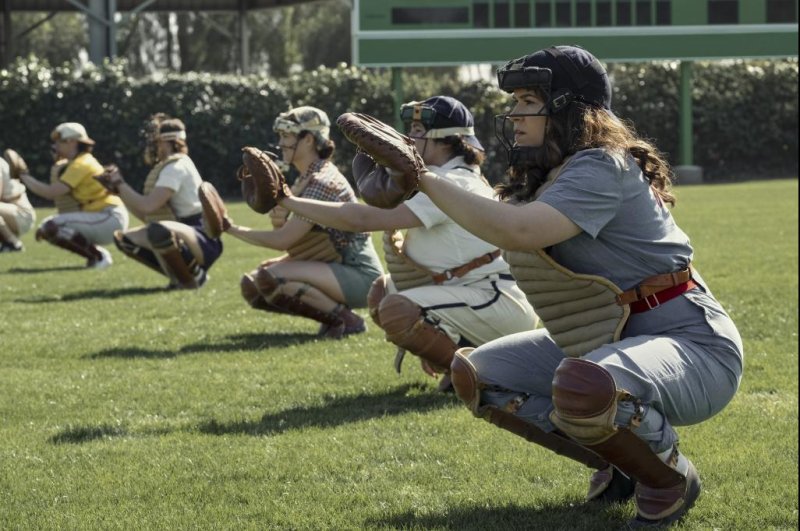 LOS ANGELES, Aug. 8 (UPI) -- Abbi Jacobson said her Prime Video series, A League of Their Own, premiering Friday, is based more on the history of the All-American Girls Professional Baseball League than the 1992 movie about that organization.

"The movie doesn't need to be remade," Jacobson, 38, told UPI in a recent Zoom interview. "If we're going to embark upon this project, it's going to be about the stories that were not able to be told, that Penny Marshall couldn't tell in 1992 or just the ones that weren't focused on."

Jacobson co-created the show with Will Graham. She plays Carson Shaw, a married woman who joins the league while her husband is serving in World War II.

The outfit was a real women's baseball league that began in 1943 and lasted until 1954. While playing for the Rockford Peaches, Carson explores relationships with other women.

"A lot of the players who played in the league were queer," Reff said. "We saw that as our privilege and, at least for me, my responsibility."

Molly Ephraim, 36, plays Maybelle Fox in League. Ephraim said Fox was based on Blair, whom she felt pressure to embody.

"She's got hair up to here, she's got these shades and nails, Louisville Slugger as a cane," Ephraim said. "She is ridiculously sassy, spunky and spirited. I'm just trying to have an ounce of that."

"Max is inspired by three real life women -- Toni Stone, Mamie Johnson and Connie Morgan," Adams said. "All three of those women played in the Negro Leagues, and yet we don't really know their names."

Max receives support from her mother, Toni (Saidah Arrika Ekulona). Ekulona said she did not have a historical basis for Toni, but understood her to be "a mother determined to have her child succeed."

Other fictional characters on A League of Their Own also are based on real-life players. Esti Gonzalez (Priscilla Delgado) is based on Isabel "Lefty" Alvarez. Delgado, 20, said she read Kat D. Williams' 2020 biography on Alvarez, a Cuban American, to prepare for the role.

Kelly McCormack, 31, said she based her character, Jess McCready, on a real player..

The Canadian McCormack said she was also inspired by Canadian players in the women's league.

"As a Canadian, I was looking at all the farm girls who got on trains, went down to the States and crossed the border for the first time," McCormack said.

Even the actors who did not base their characters on specific players studied the historic lead for inspiration. Melanie Field, 34, said her character, Jo De Luca, could represent any number of women who played in the league.

"The fun part of the research for me was just flipping through these pages and seeing these women's faces, hearing their stats and hearing where they came from," Field said.

D'Arcy Carden, 42, plays Greta Gill, a more sexually open player who encourages Carson to explore. Carden said she spoke with Blair about her memories of the league.

"Something she would say a lot is that it was the best time in her life and that it was a party," Carden said. "We really wanted to bring that spirit to the show."

The movie invented fictional characters, too. It centered on Dottie (Geena Davis) and her younger sister Kit (Lori Petty) joining the Rockford Peaches.

Though the Prime series also features the Rockford Peaches, who were a real team, Graham said it wasn't necessary to import any of the film's characters.

"There were 800 women who played in the league," Graham said. "It would almost be strange to do Dottie and Kit again when there are so many more real stories to pull from."

The movie was also a PG-rated film appropriate for the whole family. The Prime Video series would be rated R if it were a movie because of its use of profanity and depictions of sex.

Jacobson said she didn't want the show to sanitize the way female athletes and romantic partners might actually talk.

"That also sometimes can include more cursing," Jacobson said.

All 8 episodes of A League of Their Own premiere Friday on Prime Video.

TV // 6 hours ago
'FBI' crossover with 'International,' 'Most Wanted' coming in April
Jan. 31 (UPI) -- "FBI" and its spinoffs "FBI: International" and "FBI: Most Wanted" will have a crossover event on CBS in April.

TV // 8 hours ago
No second seasons of 'Reboot,' 'Kindred' on Hulu
Jan. 31 (UPI) -- Time-travel drama "Kindred" and comedy "Reboot" will not be getting second seasons on streaming service Hulu.

TV // 9 hours ago
Showtime gets a new name, cancels three new series
Jan. 31 (UPI) -- Showtime has canceled three of its new dramas as the cable TV network is rebranded "Paramount+ with Showtime."

TV // 10 hours ago
What to watch: new shows featuring 'Game of Thrones' stars
NEW YORK, Jan. 31 (UPI) -- "Game of Thrones" actors Pedro Pascal and Bella Ramsey star in the new hit series "The Last of Us." Here are other shows where you can catch former "GOT" stars.