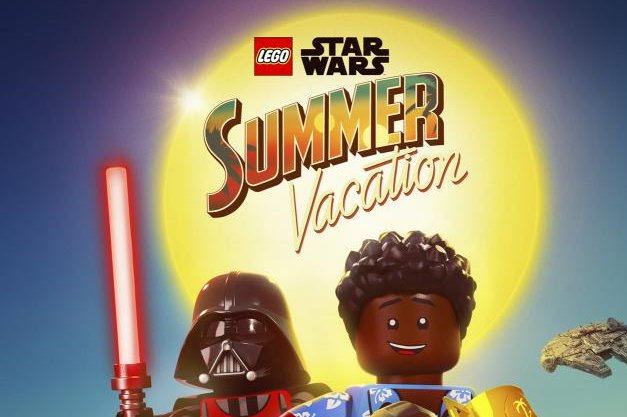 July 25 (UPI) -- Lucasfilm released a new clip and official poster on Monday for its upcoming animated special LEGO Star Wars Summer Vacation, which will begin streaming on Disney+ on Aug. 5.

The clip originally debuted during LEGO's panel at Comic-Con International in San Diego, Calif., and features Finn, Rey, Poe, C-3P0 and the rest of the Star Wars sequel trilogy cast as they adventure on the starcruiser Halycon in search of a summer vacation.

Things don't go according to plan, though, when Finn gets separated from the rest of the group, and ends up on a new adventure of his own.

"While searching for his friends, [Finn] encounters three Force ghosts: Obi-Wan Kenobi, Anakin Skywalker and Leia Organa, who each share their own unexpected stories of vacations gone wrong, helping him to understand that holidays are about more than just having fun," Lucasfilm said.

A new poster was also rolled out by the entertainment giant to celebrate the release of the clip, featuring numerous beloved characters from the saga.

The special was announced earlier this year as part of a continuing collaboration between Star Wars and LEGO. A teaser trailer for the program was released in June.

Taking place after the events of 2019's Star Wars: The Rise of Skywalker, the special will feature the voices of a number of returning actors to the saga. This includes Kelly Marie Tran, Anthony Daniels, Billy Dee Williams, James Arnold Taylor and Matt Lanter.

Daniels, notably, has played protocol droid C-3P0 in all nine of the saga's main films, and has returned to play the droid in various other media dozens of other times.

Williams first appeared as Lando Calrissian in 1980's Star Wars: The Empire Strikes Back, reprising the role in 1983's Star Wars: Return of the Jedi.

He would return to the role for The Rise of Skywalker, one of the longest intervals for an actor to reprise an on-screen character.

In addition to the veteran Star Wars actors, LEGO Star Wars Summer Vacation will feature, among others, the voices of "Weird Al" Yankovic, Yvette Nicole Brown and Matt Sloan.

Star Wars continues to heavily merchandise itself through LEGO, with the iconic toy company having first licensed the brand in 1999. The current licensing agreement will allow LEGO to produce Star Wars merchandise through 2032.

LEGO has gone on to create its own line of Star Wars-branded video games, building sets, television specials and more.

The Billund, Denmark-based brand, has continued to grow and is now among the best selling toy companies in the world, with revenues in 2021 reportedly jumping 27 percent.

Star Wars, meanwhile, is continuing to push out content through its acquisition by Disney.

Its latest television series, Obi-Wan Kenobi, was released in May to critical acclaim. The galaxy far, far away will next be seen in Andor, a live-action series based on 2016's Rogue One: A Star Wars Story, which will premiere on Aug. 31.

TV // 16 hours ago
Boulet Brothers to expand 'Dragula' franchise with new streaming deal
Aug. 15 (UPI) -- The Boulet Brothers signed a deal with Shudder to bring a new slate of content from their "Draugla" franchise to the platform.

TV // 22 hours ago
Stars head to Toronto for 'Boys' Season 4
Aug. 15 (UPI) -- "Boys" showrunner Eric Kripke has hinted on social media that he is in Toronto to start filming Season 4 of his Prime Video superhero series.

Adele on boyfriend Rich Paul: 'I've never been in love like this'