Zahn McClarnon: 'Dark Winds' is chance for Native Americans to tell their own stories 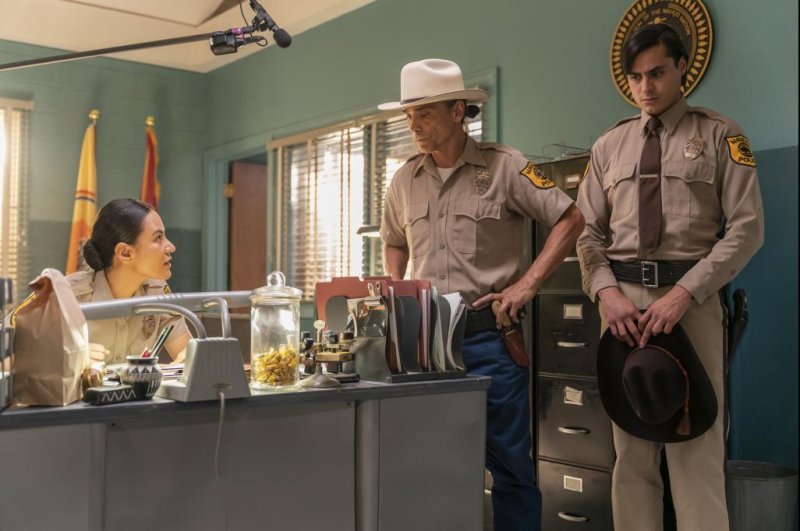 "It is the chance to have some more visibility for our community, a chance for us to tell our own stories," McClarnon told reporters in a recent virtual roundtable interview. "Those things are important to me."

Airing Sundays, the show takes place in 1971 on a remote outpost of the Navajo Nation near Monument Valley in the southwestern region of the United States.

McClarnon plays Lieutenant Joe Leaphorn of the Tribal Police who is investigating the mysterious deaths of an elderly, ailing Native American man seeking help from a blind healer and her granddaughter in a reservation motel. Assisting Leaphorn on the case are his decades-younger deputies Jim Chee (Kiowa Gordon) and Bernadette Manuelito (Jessica Matten).

For years, McClarnon's face has been a familiar one on television, but Dark Winds marks his first outing as a series lead and producer.

Even though the American Southwest in the 1970s isn't often seen on the screen, the time and location is ripe for storytelling and Dark Winds uses the setting to great advantage, its stars pointed out.

"It's also tapping into the American Indian Movement, just being able to showcase Native characters during that time frame when that was a very impactful moment in North American history," the actress said.

"We are tapping on issues through the series that are directly related to what the cause was about. I find that incredible."

The 1970s were also just a fun time to revisit, according to McClarnon, who lived through the era in real life.

"The history and cinema and art and TV? It was an exciting time in the 1970s. It was exciting for me to be able to jump back in that period of time and, like Jessica said, there was a lot going on with the Native American culture," McClarnon said.

"There was kind of a renaissance in the '70s for Native Americans to find their identity and be proud of it."

Gordon got a kick out of the old-fashioned, but period-appropriate investigative techniques the cops had to rely on to track people down and solve crimes in a jurisdiction that covers tens of thousands of miles.

"You have to have quite a lot of skills in this department," Gordon said.

"We are working off of instincts and, on top of that, know our lands," she said. "We have a nice balance, the three of us."

While the trailer for the show hints at supernatural themes such as visions, curing rituals and people using medicine to protect them from evil spirits, McClarnon said that isn't a huge part of the story they are trying to tell here.

"Throughout the history of television, in regards to Native stories, there's been a lot of romanticized mysticism," he said.

"With Dark Winds, we've tried to not be so on the nose. Yes, it's part of the culture, but not put it in the forefront of the stories," he added. "Among the stereotypes of Native culture and Native Americans is that we are these stoic, mystical creatures. We don't want to double-up on that stereotype."

Matten hadn't read the Leaphorn & Chee books before starting work on the show, choosing to rely instead on the screenplays.

"After you're in the character for so long, you get curious about the novels," Matten said.

"So, I started reading them and they are fascinating."

Gordon, on the other hand, devoured the series as soon as he heard a TV version was in the works.

"Audible's a great thing - just download all the books and listen to them when you're on a car ride," the actor said.

"I don't have a lot of time to sit and turn page after page. And I've seen the TV miniseries they made for PBS," he said, referring to 2002's Skinwalkers. "I was actually an extra on one of the days. My mom knew Adam Beach, who was playing Jim Chee at the time. We went on set and I got into one of the scenes. It's so funny."

Eyre, who also previously worked on Skinwalkers, said in an email interview with UPI that McClarnon, Gordon and Matten were hired because they were hard-working, knew their Native American culture/history well and had a special "it" fact that is hard to define, but instantly recognizable.

Roland told UPI separately that there was no audition process for Leaphorn.

"Zahn was always our pick for Joe Leaphorn," Roland said.

"He is one of the best actors working today, and we knew he'd deliver an incredible performance, but Joe was written in the fashion of a protagonist from an old Clint Eastwood western: the strong, silent-type, if you will," Roland added.

"We knew Zahn could convey a world of emotions with just a look. His face and eyes are so expressive and, it sounds cliché to say, but he really does have pathos to his work."

Leaphorn is unusual in that he doesn't seem worried that his deputies might be smarter or better at the job than he is.

"Zahn, and by extension Leaphorn, are very secure in their abilities, and, in my experience people who know what they bring to the table are always the best collaborators because they're not threatened by others' abilities," Roland said.

"Leaphorn isn't worried about being outshined by his younger officers," Roland added. "His focus is purely on solving the case, and he isn't worried about ego or personal accolades. Zahn is very much that way as an actor. He puts the scene and the story first. He wants everyone to have their moment."

Eyre described the three main characters in Dark Winds as being like traditional cops depicted on American television, but "also more."

"They come from a place where it is essential to know the people in their community in order to police well and to also not be above 'the people.' They portray themselves as helpers, not outsiders with egos that merely try and flex their powers towards a community they don't know," Eyre explained.

Law enforcement officers on the show live where they work and know some of the families they interact with their whole lives.

"You can feel that connection they have towards where they are each day, uniform or not," Eyre said.

Eyre and Roland echoed McClarnon's sentiments about how important representation is and how essential it is to have Native American writers penning a drama ABOUT Native Americans.

Eyre also praised AMC for its support in taking a risk by trying something different and providing a "counterbalance" to western stories told before.

"Our job, besides to entertain, might be to 'shine a light,' and I find incredible value in weaving together two different cultures, because that is the way we live," Eyre said. "The passion is in the exploration of what the possibilities are for diverse people to come together like we do in real life and see what's happening."

Native writers may have diverse backgrounds and experiences, but they generally have a shared understanding and perspective of their culture that they can then imbue the characters they write.

"It is a relief to have the security that these writers can speak - specifically to the experience of writing a Leaphorn and Whitover conflict - from a Leaphorn point-of-view," Eyre said, referring to Emmerich's White FBI character.

Authenticity was very important to everyone working on the show.

"Not only the faces and the performances, but the writing and directing, the set design, wardrobe, props - all of it contributes to the whole," Roland said.

"Audiences are very sophisticated and I believe they can feel when something isn't authentic, and, if they feel that, they'll tune out."

Travis Barker on the mend after 'life-threatening pancreatitis' hospitalization