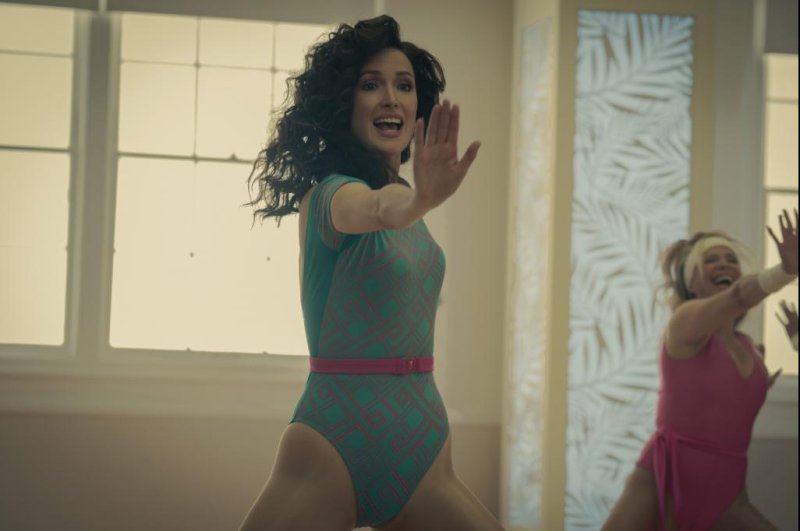 "The day we actually shot the big video sequence, it was a long day," Byrne told UPI in a Zoom interview. "I burnt out."

Having regained possession of the master tapes, Sheila promotes her videos with appearances and demonstrations, and bigger recorded productions in Season 2. After the first season, Byrne said, she had to train with choreographer Jennifer Hamilton for months on Season 2's aerobics routines.

"I'm deeply uncoordinated and not a natural dancer by any means," Byrne said. "So we get there, but it's hard work. It definitely requires all my concentration."

Co-star Deirdre Friel said Byrne was being too modest. Friel said she was impressed by one of Byrne's scenes she witnessed.

"We did a day at the fairgrounds, it was 95 degrees and she went for like three hours on the stage," Friel said. "She can go hard with the aerobics."

"It can be complicated to go into business with your friend, but they try to do it," Friel said. "Greta is deeply and profoundly inspired by Sheila, big time."

Season 1 introduced Sheila coping with an eating disorder. Sheila was bulimic and would binge and purge fast-food burgers.

Another hallmark of Physical Season 1 was the inner monologue Sheila speaks in voiceover. Sheila berates herself in monologues only she, and the viewer, can hear.

"We all have it, right?" Byrne said. "A lot of people say that to me after they've seen the show."

Byrne said she records the inner monologue after she's filmed her scenes and the episode is edited together.

"It's something that evolves a lot over the period of the shoot," Byrne said. "It's great to examine the human condition."

Season 1 of Physical also left Greta with a new hairdo. She shaved her head when she discovered her husband had a fetish for women who shaved their heads.

Season 2 picks up some months later. Greta's hair has begun to grow back, and Friel got a haircut to match.

"For the first two to four episodes, we had wigs on me to get me to where my real hair length was," Friel said. "My hair was a little shorter than it is now, so then we started using my real hair."

TV // 1 day ago
Jon Batiste leaves 'Late Show' after 7 seasons as bandleader
Aug. 12 (UPI) -- Jon Batiste has exited "The Late Show with Stephen Colbert" and will be replaced by Louis Cato.

TV // 2 days ago
'Rick and Morty' take on aliens in Season 6 trailer
Aug. 11 (UPI) -- "Rick and Morty," an animated comedy series created by Justin Roiland and Dan Harmon, will return for a sixth season in September.
Advertisement