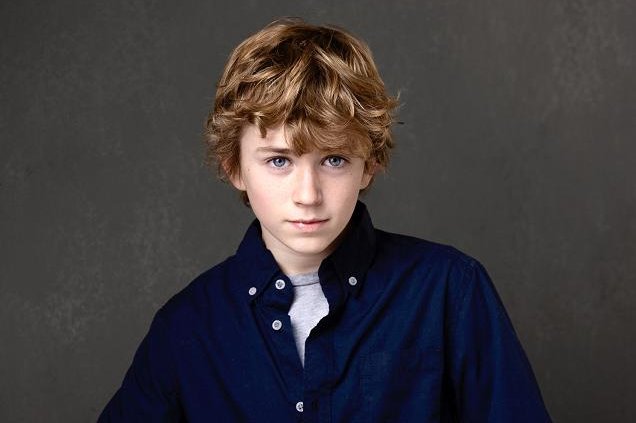 Walker Scobell will play Percy Jackson in the Disney+ series "Percy Jackson and the Olympians." Photo by Paul Lorei/Disney

April 11 (UPI) -- Walker Scobell has landed the lead role in the Disney+ series Percy Jackson and the Olympians.

The streaming service said in a press release Monday that Scobell, 13, will play Percy Jackson in the new live-action fantasy series.

Percy Jackson and the Olympians is based on the Rick Riordan book series. The TV series follows Percy, a 12-year-old modern demigod who is just coming to terms with his newfound supernatural powers when the sky god Zeus accuses him of stealing his master lightning bolt. Percy must trek across America to find the bolt and restore order to Olympus.

Scobell's Percy is described as a smart and passionate kid with a sharp sense of humor. The character has always seen himself as an outsider, in part because of how the world sees his ADHD and dyslexia, but is an affectionate son and loyal friend who just wants to do right by those he cares about.

Riordan and Jon Steinberg will write the pilot episode, with James Bobin to direct. Steinberg and his producing partner Dan Shotz will oversee the project and serve as executive producers with Bobin, Riordan, Rebecca Riordan, Bert Salke, Monica Owusu-Breen and Jim Rowe.

Percy Jackson and the Olympians will begin production in the summer.

Scobell most recently starred in the Netflix film The Adam Project. The actor played a young Adam Reed, while Ryan Reynolds portrayed the adult version of the character.

'Nimona' movie with Chloe Grace Moretz coming to Netflix Jonathan Bailey: 5 roles beyond 'Bridgerton' Spring reading: 10 books being adapted for film, TV What to watch next: Sign up for UPI's Streaming newsletter

TV // 9 hours ago
'Shadow and Bone' Season 2 coming to Netflix in March
Dec. 8 (UPI) -- "Shadow and Bone," a fantasy series starring Jessie Mei Li and Archie Renaux, will return for a second season on Netflix.

TV // 11 hours ago
Mariah Carey says she never called herself 'Queen of Christmas' on 'Colbert'
Dec. 8 (UPI) -- Mariah Carey talked about Christmas music and traditions in an appearance on "The Late Show With Stephen Colbert."