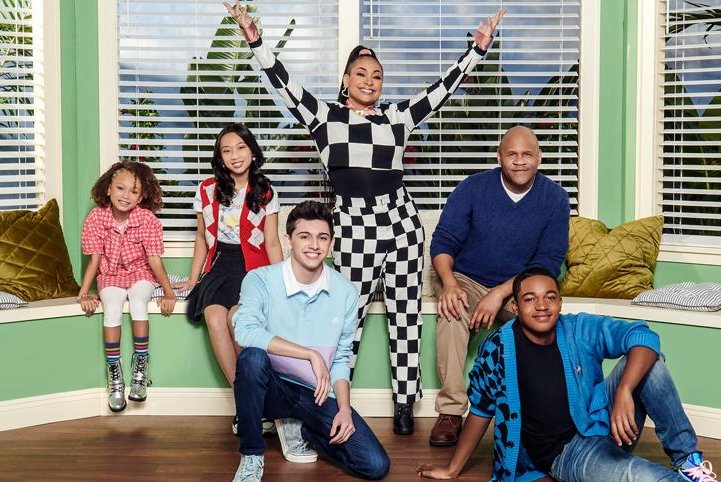 Raven's Home is a spinoff of the beloved series, That's So Raven, which followed Raven-Symone as psychic San Francisco teen Raven Baxter when it initially aired on the network from 2003 to 2007.

Until now, the sequel series depicted Raven as a fashion designer and a single mom raising twins in Chicago with her best friend, Chelsea (Anneliese van der Pol).

When the show returns with fresh episodes Friday, Raven will be moving her son, Booker (Brown), back to her hometown to take care of her father, Victor (Rondell Sheridan), after he has a mild heart attack. Shel also assumes guardianship of her young cousin, Alice (Mykal-Michelle Harris).

This season also will see the return of Alana (Adrienne Bailon-Houghton), Raven's arch-nemesis, who now is the principal at Bayside High, at which Booker will be a student.

Raven-Symone told UPI in a recent Zoom interview that she couldn't wait to see how Booker would acclimate to her character's old stomping grounds and what kind of relationships he might forge.

"My son is growing up," she said. "He has new friends and I just get to watch from the sidelines and be the best mother I can without interfering too much."

Added Brown: "I'm most excited to explore all the classic That's So Raven sets that we got to reinvent and kind of live in and make our own memories in, which is super-dope.

"We have the original Baxter house, the Chill Grill, of course, not to mention Bayside High, where hundreds of shenanigans take place."

Sheridan was happy to reunite with his TV daughter, who he described as a talented kid who grew up into a dynamic, hilarious woman.

"It helps when your star was 13 when you started, so she's not 105 when you come back to that show," he laughed.

"We know each other really well. It's kind of that Michael Jordan-Scotty Pippin basketball reference. She goes left. I know where she is going to go. So, getting to play with Ray is great, and the new cast is great."

He said it has been a joy watching Brown grow from a little kid to a young man as Raven's son.

"Every time I watch him, I go: 'Where'd you get that from? You got that from Raven, didn't you?' You know where Raven got that from? She didn't get it from me, but yeah. ... To be able to see that handed down with the new cast is incredible."

Raven-Symone said she is pleasantly surprised Raven's Home has been so well received when so many other series revivals have fallen by the wayside in recent years.

"There is so much content out there for us to gobble up," she said.

"We are humbled by multiple generations wanting to watch my character - who has been in people's living rooms and bedrooms in their televisions for as long as she has - but also welcoming and falling in love with new characters."

The cast and crew constantly endeavor to make the audience happy that they chose to spend their time watching Raven's Home, the actress and producer said.

"Every day, we get on set, we work our hardest, we try our best to show diversity, to make shows that resonate with the now and, hopefully the future, so that you can continue to be entertained by us," she added.

Brown pointed out Disney Channel doesn't typically renew shows for a fifth season, so he sees the longevity of Raven's Home as a sign of the network's support.

"The fact that we are as far as we are is, in of itself, a blessing," he said. "One of the reasons we've done so well is that we have these awesome characters that people can relate to.

"Take away the psychic element, who wouldn't want a best friend who is willing to go the extra mile for you and step out for you in the field of battle and that is who Raven Baxter is and Raven-Symone's brought her to life. I think people relate to us."

Sheridan said he loves that people of all ages enjoy the show.

"Imagine a sitcom that you watched with your family, and now you are watching that show with your family. You're the kid in one and you're the adult in the other one," he said. "That's got to be great."

The stars emphasized that family and friendship are the heart of the show, but not at the expense of laughs.

"We go through it. Isaac and I have done our homework on the history of comedy, whether it's my version, which goes all the way to Flip Wilson, or his version, which is Martin Lawrence," Raven-Symone said.

"We know how important it is to make someone laugh. In the hardest of times, in the darkest of times, I've gotten in trouble because I can't cry. I'd rather make someone laugh, and after they're done being mad at me for being insensitive in that moment, they come back to me and say, 'That was funny. Just don't do it again.'"

Raven-Symone said she thinks the close-knit relationships of the cast members is palpable to the viewers.

TV // 3 hours ago
Tim Gunn, Heidi Klum: Pandemic is ending; it's time to look cute again
NEW YORK, Aug. 19 (UPI) -- Tim Gunn and Heidi Klum say celebrating beauty, imagination and creation has never been more essential than it is now when so many people are resuming their lives after isolating because of the coronavirus pandemic.

TV // 21 hours ago
Audrey Whitby explores 'the evil of it all' for 'In the Vault' S2
Audrey Whitby says Season 2 of her Crackle thriller "In the Vault" will show the dark side of her good-girl college student character when it premieres Thursday. [Note: This story contains spoilers for Season 1.]

Netflix adapting 'The Decameron' from 'Orange is the New Black' creator