Deadline said Tuesday that the Dexter sequel series averaged over 8 million weekly viewers across all Showtime platforms during its 10-episode run.

The New Blood finale also set a new ratings record, with 2 million viewers from streaming and on demand platforms.

In addition, the episode had 3 million total viewers Sunday, making it the biggest Showtime finale since Homeland in 2013.

"We're thrilled by the overwhelming response from the millions of fans of Dexter: New Blood these past 10 weeks," Showtime Networks president Gary Levine said in a statement. "Whether they loved the finale or couldn't bear to see it end, we so appreciate their passion."

"Our deepest thanks to Michael, Clyde, Scott, and Marcos for delivering a profoundly powerful conclusion to our beloved and extraordinary series," he added, referencing series star Michael C. Hall, showrunner Clyde Phillips and executive producers Scott Reynolds and Marcos Siega

New Blood takes place 10 years after the events of Dexter, which had an eight-season run on Showtime from 2006 to 2013. The sequel series follows serial killer Dexter Morgan (Hall) as he attempts to start over in a small town in New York.

TV // 19 minutes ago
'And Just Like That' cast talk bringing diverse stories to series on 'Drew'
Jan. 24 (UPI) -- "And Just Like That" stars Nicole Ari Parker, Karen Pittman and Sarita Choudhury discussed how the "Sex and the City" sequel series introduced new characters of color while appearing on "The Drew Barrymore Show." 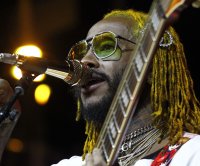 TV // 3 hours ago
Dylan Dreyer returns to 'Today' after son Russell's birth
Jan. 24 (UPI) -- "Today" meteorologist Dylan Dreyer gave an update on her family during her first day back from maternity leave.