Dec. 9 (UPI) -- James Corden has reached 1,000 episodes of The Late Late Show and celebrated the milestone with Mariah Carey, BTS and Tom Cruise.

"When we started this show, Joe Biden worked in the White House, a new Spider-Man movie was out, Adele had just released an album. It was a completely different time and world," Corden joked during his opening monologue.

Corden got to cement his handprints on CBS' Pathway of Pioneers just outside the Late Late Show studio. The comedian got his hands stuck in the cement just as Carey arrived.

Cruise appeared virtually and reminisced about how they went skydiving together on the show.

"Congratulations. You brought a tremendous amount of joy and entertainment. You are enormously talented and we love you," Cruise said.

Corden thanked Carey for taking a chance on him with the first-ever edition of Carpool Karaoke. Carey and the late night host then recalled making the popular segment.

Corden said Carey seemed like she was confused at what Carpool Karaoke was and mentioned how she wasn't ready to sing at first.

"I remember having fun with you in the car. I remember being, yet again, insecure like, 'What are we doing? I don't really know what this is,"' Carey said.

BTS gave a special performance of their hit song "Butter" that started with the K-pop band arriving through the show's live audience.

BTS walked down to a colorful dance floor that was surrounded by audience members and took turns dancing.

BTS appears on 'Corden' for first time in two years Dwayne Johnson sings karaoke, tours studio with James Corden on 'Late Late Show' What to watch next: Sign up for UPI's Streaming newsletter 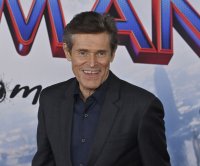