Elton John talked about his friendship with Stevie Wonder and performing with John Lennon on "The Tonight Show." File Photo by John Angelillo/UPI | License Photo

John, on Wednesday, noted how he finally collaborated with Wonder on song "Finish Line," which appears on his newly released album titled The Lockdown Sessions.

"It's a dream come true for me because you know, not only do I love him as a musician and worship him as a songwriter, but he's one of my favorite people in the whole wide world. So this was a very exciting thing for me," John said about finally collaborating with Wonder on a song.

The music legend also recalled how he once accidentally rejected a birthday serenade from Wonder in 1973. John was onboard a plane known as the Starship and had performed at a show that he was unhappy about on his birthday.

"I went up front and sat on my own and they said, 'Come up to the bow. We want to sing 'Happy Birthday' to you' and I went, 'I'm not interested in my birthday.' And this happened about three or four times until my publicist burst into tears and said, 'You have to come up there. Stevie Wonder is at the organ,'" John recalled before stating that he eventually did hear Wonder sing him "Happy Birthday."

John also talked about performing with Lennon onstage at Madison Square Garden in New York City on Thanksgiving. The show was Lennon's last live performance before his death in 1980.

John said Lennon took the stage because he lost a bet about their song "Whatever Gets You Thru the Night" reaching No. 1 on the music charts.

"It was one of the most magical moments of my life. Probably for me, the memory of him coming onstage and getting so much applause. I think all the band, and myself, were moved to tears. And it was such a wonderful occasion," John said. 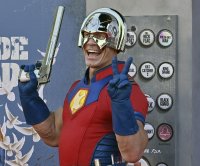