Oct. 17 (UPI) -- 24 and Rubicon alum James Badge Dale says Ray, the disgraced detective he portrays on Hightown, will attempt to pick up the pieces of his shattered life and career when Season 2 debuts Sunday on Starz.

"He's living in his basement, he's Airbnb-ing his house and he's working as a bartender," Dale told UPI about Ray in a recent video conference call. "He's someone who is trying to get back, but can't seem to get out of his own way."

The contemporary drama follows the cops charged with slowing the flow of illegal drugs into the Massachusetts resort town of Cape Cod.

Ray was suspended at the end of Season 1 for his romance with informant Renee (Riley Voelkel). The relationship compromised the criminal case against Renee's boyfriend, powerful drug dealer Frankie (Amaury Nolasco), and ultimately led to his release from prison.

"What was so cool about Season 1 was Ray crawling up this upward trajectory and, at the end, he finally thinks he's won," Dale explained.

"He finally thinks he's put Frankie away, and that he's got the girl and he's won, and he comes to this very egotistical place -- and then he is just dropped down an elevator shaft."

In Season 2, Ray still has to deal with Renee, Frankie and Cape Cod's opioid problem, only this time without his badge and gun.

"Renee is such a huge piece of this puzzle," Dale said.

"Ray's heart beats for Renee in a different way than he's experienced in many, many years. At the same time, I think it is the source of a lot of pain. He loves her. Frankie, on the other side of that, is another obsession. Ray's like, 'I have to beat Frankie.'"

Not many people would deliberately court heartbreak and failure in real life, but Dale thinks these dimensions of misery are delicious to explore as an actor.

"I love playing in those damaged areas, and Ray has a lot of damaged areas to play with this season," he said. "The juxtaposition of the man you saw in the first season with the man you see in the second season is pretty drastic."

If a role isn't emotionally exhausting, it isn't worth playing, Dale insisted.

The actor is proud to be a part of a show that isn't just entertaining, but also reflects social issues many viewers are facing today.

"We are playing with material that is very relevant now," he said. "I hope that people have a good time watching this, but also that it starts discussions."

Dale said he hopes people relate to the characters, who are well-drawn and flawed with complicated motivations, not just lightly sketched as heroes and villains.

"It's not a black and white, good guy-bad guy thing. There are a lot of gray areas," he said.

"There are moments I'm reading this where I say, 'You know what? I relate to Frankie. I relate to Jackie [Monica Raymund.] I relate to all these different characters, who are just striving to do the best thing for themselves and the people they love around them.'"

Dale, who lives in a small fishing town on the northeast coast of the United States, described the region as a special place.

"The winters are different here. The winters will test you. You'll find out the truth about who you really are," he said. "There's a real sense of community and a lot of history. We try to be honorable to Cape Cod and to the culture over there. It's fishermen and artists."

The Hightown cast and crew, a team of about 100 people, tries not to be too disruptive when they set up shop each season.

"We've got a lot of big trucks and generators and we have to [work] with that town in mind. Be respectful," Dale said.

As a real-life resident of a place like this, he knows villagers are a bit relieved when tourists or workers go home.

"We feel like we are just getting our town back," he laughed. 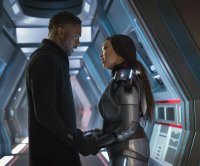