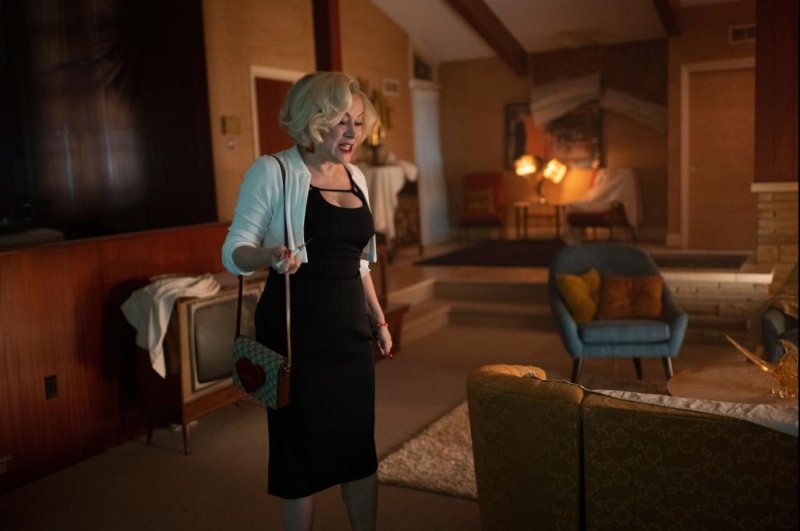 NEW YORK, Oct. 12 (UPI) -- Bullets Over Broadway actress Jennifer Tilly said she is grateful to Don Mancini, creator of the Chucky horror film and TV franchise, for allowing her to play the evil bombshell Tiffany for decades instead of leaving her to audition for traditional "grandma"-type roles.

Chucky -- a contemporary, small-screen follow-up to Mancini's seven movies about the titular demonic doll -- is set to debut Tuesday on Syfy and USA Network.

It will once again feature Tilly as Tiffany, girlfriend of Charles Lee Ray, the deranged murderer who possesses toddler-size toys and slays the unsuspecting. Deadwood alum Brad Dourif, who has voiced the demonic dolls for more than 30 years, also returns for the TV show.

This time around, the action takes place in Ray's hometown of Hackensack, N.J., where Jake (Zackary Arthur), a middle-school student and aspiring artist, picks up a retro Good Guys doll at a yard sale, and then desperately tries to dump it when misfortune befalls those around him.

"I wanted to bring the franchise back to its Child's Play roots," Mancini said, referring to the first movie in the series, which premiered in 1988 and followed the misadventures of Chucky and his owner, a young Chicago boy named Andy (Alex Vincent).

"We hadn't focused exclusively or substantially on kids in a while, but having done little kids already, I thought that 14- or 15-year-olds would be super interesting because people [that age] are at a really interesting time in their lives. They are just finding themselves, and I thought introducing Chucky into that mix could be really interesting."

Mancini, 58, said Jake is the gay hero he wishes he could have watched on television when he was growing up.

"I thought it was a great opportunity to give young gay fans representation and to see themselves on screen in a way that I wasn't able to when I was 14 and 15 years old," Mancini said.

"It's also 'write what you know,' so a lot of what Jake is going through, I experienced and lots of gay guys experience. I think, hopefully, it is a lot better now, but we certainly still have a long way to go. I wanted not only to normalize that -- the notions of being gay and gay romances -- but I wanted to make it cool."

Mancini noted Andy was a "sweet, little, fairly well-adjusted, untroubled kid" before Chucky turned his life upside-down, while he called Jake the "anti-Andy Barclay," an appropriate protagonist for 2021 and someone who is dealing with bullies at school and at home.

"You're not, but you are an interesting, great character. Deal with that doll for 33 years and then you can be me," joked Vincent, who reprises his role of Andy in the TV show.

"It is super insane. My parents wouldn't let me watch R-rated movies," said Arthur, a 14-year-old actor best known for his work in Transparent.

Tilly described Jake as "so hot, so sensitive, so troubled" and Andy as "a sweet little kid" who is now a "crazy degenerate."

"You're going to be seeing a lot of both of these boys in the near future," Tilly teased.

"I started this when I was 6, and I am 40 years old now," Vincent said. "Thanks to Don, I'm still playing this character. Chucky hasn't killed me yet. He told me in 1988 we'd be friends to the end, and he was not kidding."

Tilly, who joined the franchise in 1998, said when Mancini announced he was working on a Chucky TV series, she hoped a place for Tiffany would exist.

"A little room under the stairs, please, sir," she quipped.

"Once the OGs show up, they are in it in a big way," Mancini said of when the franchise's original stars debut on the TV series.

He added that fans frequently tell him they value the films' continuity and consistency.

"We've had all these characters who we've been evolving over decades played by the same actors," Mancini said.

"It's just a really unique situation. With [2017's] Cult of Chucky, I ended that movie deliberately on a series of cliffhangers with the hope of setting up a TV show because I knew a TV series would be the perfect place to explore all the ramifications."

Mancini first started thinking about bringing Chucky to the small screen when he was writing for another serial killer series, Hannibal.

"It was such a great show, and I was so amazed by the process of television," he recalled.

"Going into the writers room every day didn't feel like work to me. I was like, 'Wait a minute! We come into a room every day with seven or eight other like-minded Hannibal freaks, and we get to talk about Hannibal all day and we get paid for it?' Then I thought, 'What if we got to do that with Chucky?'"

He believed bringing onboard more talented writers who understood and appreciated Chucky most likely would elevate the franchise.

"I was also really excited about having eight hours of story to tell because that would allow us to focus on character and relationships to a degree that we've never been able to do before, and also we'd be able to go down different storytelling avenues, such as the origins of Charles Lee Ray," Mancini said.

The idea for an adorable toy inhabited by wicked forces came to the filmmaker after watching his father work for years in marketing and advertising.

"I wanted to write a dark satire about how marketing could affect children. That was the original impetus and this was when Cabbage Patch Kids were all the rage in the 1980s," Mancini said.

Chucky may be on TV now instead of at the multiplex, but his compulsive swearing hasn't been cleaned up at all due to the change in media.

"You just couldn't do Chucky without them," Mancini said of the doll's inappropriate, but often hilarious, use of F-bombs.

"Officially, we get 10 per episode, which is plenty, but this being the world of 14- and 15-year-olds, Chucky is not the only one saying [the expletive]," Mancini added.

Tilly remembered an episode in which they only used the word seven times, so Mancini had Chucky yell it three times at the end.

"Just to use them up!" Tilly said.

TV // 14 hours ago
'The Great' Season 2 trailer introduces Gillian Anderson as Catherine's mother
Oct. 19 (UPI) -- "The Great," a comedy-drama starring Elle Fanning as Catherine the Great, will return for a second season on Hulu in November.

TV // 16 hours ago
'To All the Boys' spinoff series 'XO, Kitty' coming to Netflix
Oct. 19 (UPI) -- "XO, Kitty," a new series starring Anna Cathcart as Kitty Song-Covey, got the green light at Netflix.