The cold open depicted Biden -- who was previously played by Jim Carrey and Jason Sudeikis on SNL -- as he desperately tries to unite members of the Democrat party who are standing in the way of passage of his $1.2 trillion infrastructure bill.

"Let's go through this agenda together because we're all going to realize, 'Hey, we're all on the same page,'" Biden said as the politicians quickly demonstrated they had vastly different views on topics such as paid family leave and electric cars.

"Me too! Roads are where trucks live," Manchin agreed.

"I want no roads," Sinema countered.

"No roads? Why?" Biden demanded.

"What about water?" Biden wondered. "What do you say, Joe? You good with water?"

The clip also showed Sinema declaring that, as a "wine-drinking, bisexual triathlete," she knows what the average American wants and needs.

"They want to be put on hold when they call 9-1-1. They want bridges that just stop and cars fall down. They want water so thick, you could eat it with a fork," she explained. "I will fight for that no matter what."

TV // 13 hours ago
Milo Ventimiglia says 'This is Us' ending is 'bittersweet'
Jan. 25 (UPI) -- Milo Ventimiglia discussed filming the sixth and final season of "This is Us" on "Late Night with Seth Meyers." 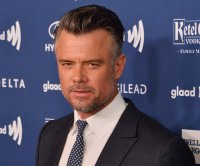 TV // 15 hours ago
'The Lost Symbol': Peacock cancels series after one season
Jan. 25 (UPI) -- "The Lost Symbol," an action-adventure series based on the Dan Brown novel, won't return for a second season at Peacock.